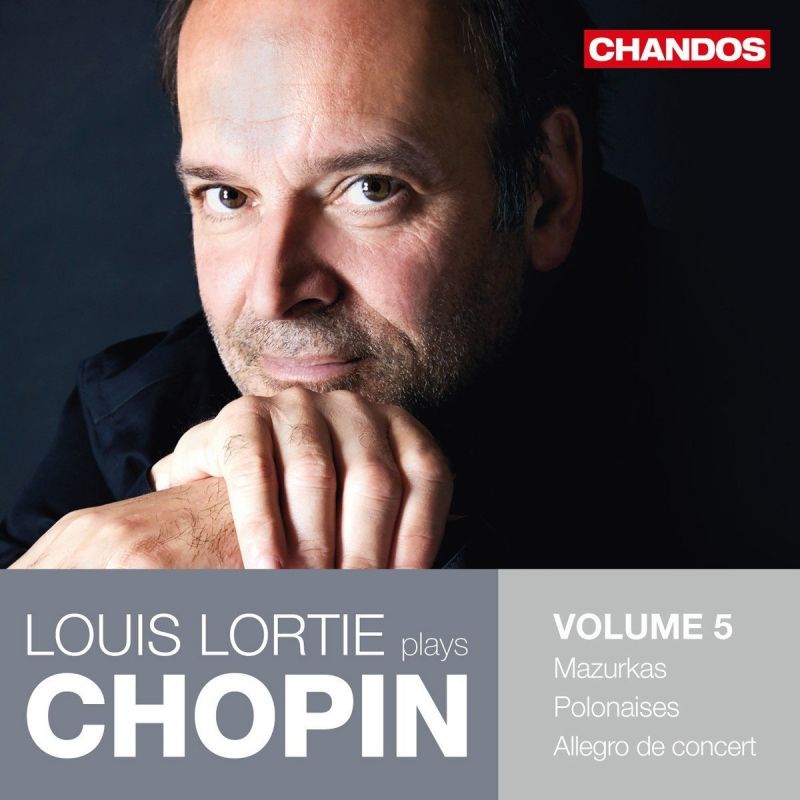 Like the previous releases in Louis Lortie’s Chopin series for Chandos, this fifth volume, presenting three sets of Mazurkas, each crowned by a Polonaise, along with the Allegro de concert, is beautifully programmed in terms of variety of affect. If Lortie relishes the characteristic qualities of his Fazioli, it is the silvery qualities of the pianos of Chopin’s time which seem to be his ideal throughout. The lean, lithe sounds he creates are ideally suited for elucidating Chopin’s inimitable polyphony and animating the music’s rich kinaesthesia. All has been sensitively captured by the Chandos engineers.

In his superb booklet notes Jeffrey Kallberg describes the Allegro de concert as originating in ‘an embryonic third concerto that Chopin peddled to publishers in 1834’. The fact that is it far from the best Chopin doesn’t prevent Lortie from treating it with care and imagination. The result is a performance that highlights the work’s harmonic and textural strengths while minimising its structural shortcomings.

Compared with other distinguished releases of the Mazurkas recently, such as those by Kolesnikov (Hyperion, A/16), Olejniczak (Chopin Institute, 11/16) and Alexeev (Chopin Institute, 12/15), Lortie’s are no less personal. Seemingly effortlessly, he imbues each with a distinct and piquant character, leaning towards a rawer, more folkloristic approach than an overly refined one. All are eminently danceable, with phrasing and voice-leading paramount.

In the Op 7 set, for instance, the ebullience of the first mazurka is proclaimed by the lingering trill at the top of the opening phrase. Later, the little hint of a Trio is clouded, muffled, mysterious. The stretching sixths of the second mazurka are strikingly sexy. The sad aura of confiding intimacy of Op 33 No 1 is dispelled by the whirling grace of the sash-dance, Op 33 No 2, the Trio’s nasal augmented fourths given their full raucous due. The delicate C major Mazurka (Op 33 No 3) is perhaps the most perfect balance of form and content one is likely to encounter in performances of this music.

The gem-like qualities of the Mazurkas notwithstanding, it is the two Op 26 Polonaises and, especially, the magisterial Op 44 that impressed me most. The opening of the C sharp minor (Op 26 No 1) fairly snarls with menace, though once the dance begins it moves with patrician hauteur, every detail articulated with keen intelligence. Lortie manages the small ritards in the introduction of Op 26 No 2 so skilfully that when the principal material finally announces itself, it is with the sudden sear of a pyroclastic flow. None of the high-octane sonorities usually applied to the Polonaises is evident here, least of all in Op 44. Its rhetorical eloquence is achieved not with violence but with an astringent clarity, implacable insistence and unflinching vehemence. Vast and smouldering as Delacroix’s Massacre at Chios, this is Chopin at his virile best. Very highly recommended.