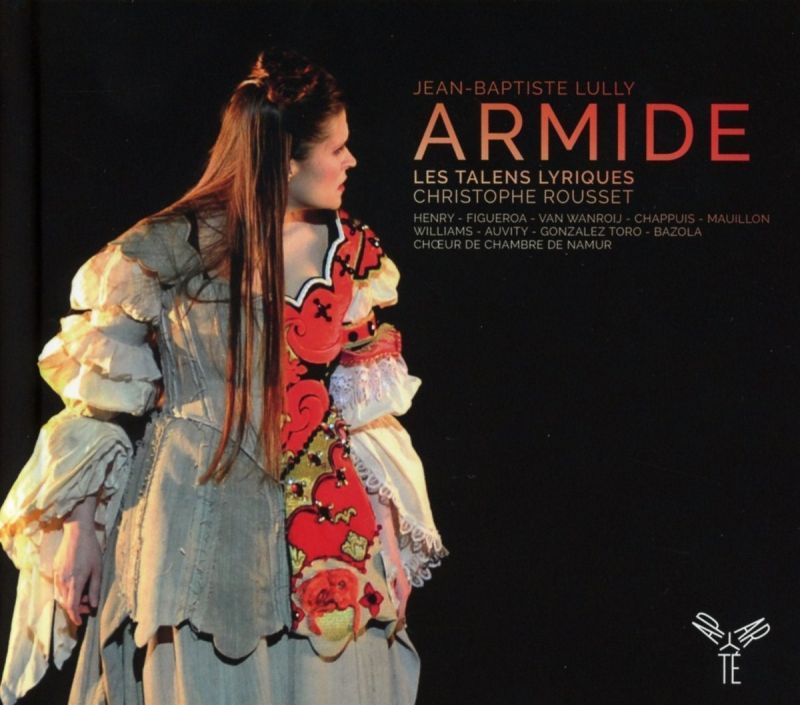 Armide (1686) was the last collaboration between Lully and the librettist Quinault. Considered by contemporaries as the perfect exemplar of Lulliste tragédie en musique, it concentrates on the inward and outward dilemmas of the central character modelled after Tasso’s infatuated enchantress Armida, whose obsessive love for the bewitched crusader Rinaldo turns to vengeful fury when he is cured of her spell and tries to extricate himself from her. Christophe Rousset’s crisply detailed concert performance at the Philharmonie de Paris in December 2015 yields the finest recorded version yet. The charming prologue is more obliquely allegorical compared to some blatantly sycophantic examples in other Lully operas; sopranos Glory (Judith van Wanroij) and Wisdom (Marie-Claude Chappuis) discuss their influence over an unnamed hero (obviously Louis XIV), and elicit polished responses from the Namur Chamber Choir. Les Talens Lyriques play with consummate mastery of elegantly swaying inégales, fizzy brilliance or suave dancelike gestures as each moment in Lully’s score demands; the assorted dances and divertissements are moulded exquisitely under Rousset’s sagacious direction from the harpsichord.

High tenor Antonio Figueroa sings Renaud idiomatically and sweetly in the pastoral sleep scene that forms the bulk of Act 2 (‘Plus j’observe ces lieux, et plus je les admire’); this ranks among Lully’s most beautiful creations and has even greater compositional finesse and flexibility of form than the sommeil in Atys. The blissfulness of demons disguised as nymphs and shepherds laying enchanted garlands of flowers on the sleeping hero is disturbed by the violent transition into the titular sorceress’s anguished monologue ‘Enfin il est en ma puissance’, in which she cannot bring herself to stab to death the slumbering Renaud: Marie-Adeline Henry captures the full measure of Armide’s conflicting emotions, and the undercurrent of theatrical tensions produced by Rousset and his band indicates why Rameau judged this sensational music to be worthy of analytical praise in his 1754 Observations.

Unremitting tension continues in Act 3: Armide’s guilt that Renaud’s love is illusory causes her to invoke Hatred (sung menacingly by Marc Mauillon), only to change her mind at the climax of an extraordinary ombra divertissement in which Hatred, male chorus and dancers attempt to break Cupid’s bows and arrows.

The respite provided by the lighter tone and entertaining magical mischief of Act 4 is judged charmingly as two Christian knights fend off seductive demons in order to come to Renaud’s rescue (there is especially fine singing from Cyril Auvity’s Danish Knight and Marie-Claude Chappuis as a demon impersonating his beloved Lucinde). The long passacaille for the Pleasures and ‘a band of fortunate lovers’ (Act 5) must have inspired the corresponding passacaglia in Purcell’s King Arthur a few years later; its sensually shaded performance by Auvity, the Namur Chamber Choir and Les Talens Lyiques demonstrates Lully’s art at its most appealing.