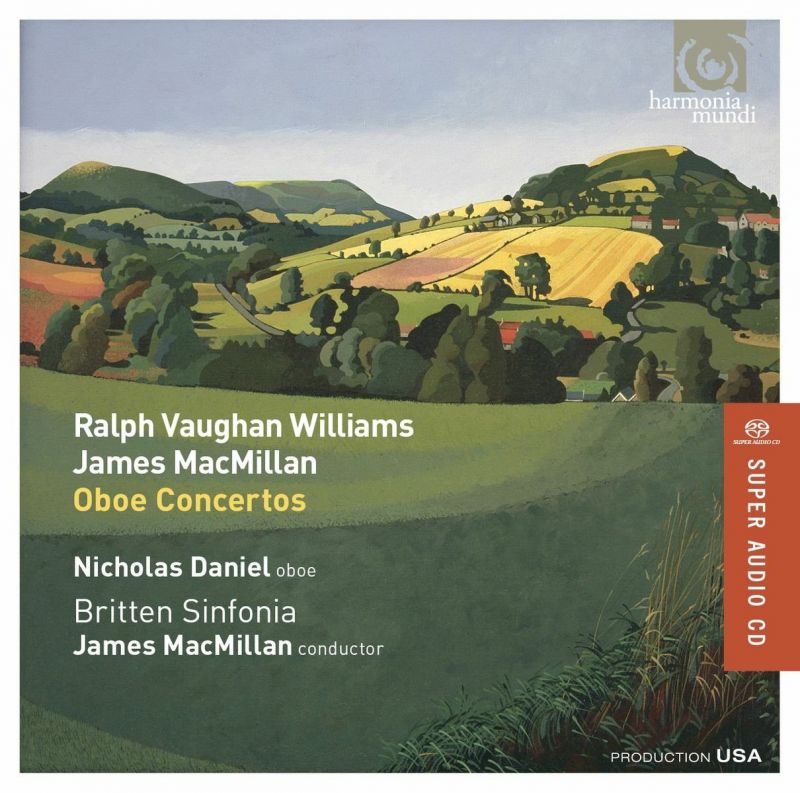 The Britten Sinfonia’s latest offering launches with a deeply understanding performance of Vaughan Williams’s Oboe Concerto from Nicholas Daniel. It was with this very work that he first made his mark as winner of the 1980 BBC Young Musician of Year competition and, to judge from the present display, it’s a piece that still means a very great deal to him. Not only do his flawless discipline, liquid tone, exquisite chiaroscuro and seemingly superhuman breath control ravish the ear, he also encourages his colleagues to give of their polished and raptly committed best. Time really does seem to stand still as the evening hush descends towards the end of first movement; and when the pace slows to Lento for the work’s final full flowering at eight after fig V (or 7'01"), it distils an unforgettable sense of blissful wonder here.

Daniel proves just as convincing an advocate of the 24-minute concerto that James MacMillan fashioned for him in 2010. At its core is a substantial reworking of an earlier piece for solo oboe entitled In angustiis (‘In Distress’), penned as a cathartic response to the horrific events of 9/11, and whose raw emotion and sorrowful anguish throw into bolder relief the motoric rhythms and feisty humour of the shorter movements. It’s a strongly communicative, sincere work that continues to lure me back, and Daniel’s contribution is past praise in its virtuosity and eloquence. MacMillan himself partners with sympathy and also secures finely chiselled accounts of his own pithy One for chamber orchestra (2012) as well as Britten’s haunted and haunting 1974 Suite on English Folk Tunes – the latter both more sharply focused and, in the valedictory ‘Lord Melbourne’, daringly spacious than either Rattle’s CBSO or Bedford’s Northern Sinfonia versions (EMI, 6/86; Naxos 12/98). Excellent sound and truthful balance throughout: this anthology merits a strong recommendation.

Suite on English Folk Tunes, 'A time there was...'

Concerto for Oboe and Orchestra

Concerto for Oboe and Strings