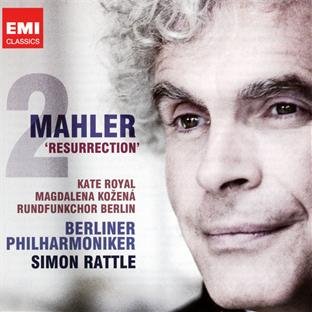 The first movement was something of a sticking-point in Rattle’s CBSO recording of the piece and it’s still after all these years a bone of contention – only here it’s the well-upholstered Berlin Philharmonic strings that sound the first unconvincing notes. Even that naked tremolando at the outset has what can only be described as a “covered” sound such as might be deployed by a singer of the old school. The shuddering declamations from cellos and basses are similarly devoid of that rosiny edge. And though this might be a by-product of EMI’s handsome Philharmonie recording keeping its distance, the circumspection and low-tension plod of the opening paragraph most certainly isn’t.

With the first appearance of the second subject the Berliners’ famed sostenuto comes into its own, with Rattle’s pronounced rubato perhaps over-accentuating the keening harmony – but the theme’s return, shyly emerging from the mists of time, is very beautiful, with voluptuous cor anglais again pointing to the BPO’s exceptional pedigree. But this is an orchestra so reluctant to make an ugly sound that perhaps what I miss most of all at the dramatic extremes of this movement is the coruscating effect of shrill, demented woodwinds and the brassy penetration of trumpets and trombones. Time and again the tutti sound strikes me as too blended.

The pacing, too, feels overly expansive despite Rattle’s meticulous adherence to Mahler’s frequent and often extreme tempo fluctuations. Certainly we’ve come a long way from Otto Klemperer’s celebrated EMI studio recording in which he systematically disregarded all such indications as if he were still conducting Todtenfeier, the first incarnation of the movement where none of these markings exist. One might include in that assessment the unmarked but traditional ritardando into the battering dissonance at the climax of the development. Rattle makes a meal of that. But surely it’s more shocking not to signal the arrival of the molto pesante? Isn’t that the reason Mahler pointedly avoided suggesting any slackening of pace in the moments before this shattering derailment?

The life-in-retrospect inner movements bring playing of exquisite tone and quick reflexes, with Rattle making much of the headlong panic which snaps us out of rosy reverie in the second movement. Again, in the Trio of the third movement, the trumpets are too blended for my taste, the “barbershop” harmony not cheesy enough to convey that old rustic charm. And when the quirky little ditty goes cosmic at the climax I just wanted more definition of trumpets and horns spinning the movement off its axis.

Magdalena KoΩená brings her customary depth of feeling to the still maternal voice of “Urlicht” (though one or two switches of register evidence some discomfort); and notwithstanding moments where I would like the veneer stripped off the brass (especially the first trumpet), the finale – with magical spatial effects – is magnificent. Rattle’s famous piano-pianissimos are deployed to breathtaking effect, the choral passages (radiantly illuminated at the top by Kate Royal) sound pure, mysterious and very Bachian, and the returning resurrection hymn is tremendous.

There is still no completely ideal recording of this inspiring piece: if we could somehow conjure an amalgam of Rattle, Fischer, Bernstein and Tennstedt we’d be getting close. I personally am drawn back to Iván Fischer, while the recent live Tennstedt lays bare the whole burning issue of mortality with uncompromising force. If he is the Beast, then Rattle is undoubtedly Beauty. If only we could bring them together.