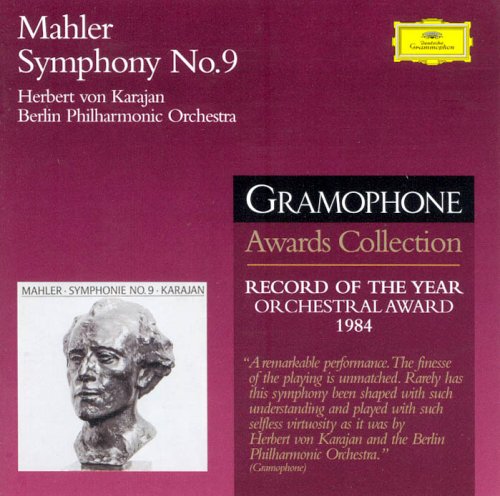 In 1980, Karajan and the BPO made a memorable LP recording of the Ninth Symphony in excellent analogue sound (DG). As a performance it went further than any extant recording in distilling the music's essentially impersonal, other-worldly character whilst at the same time suggesting what EG, writing in the Guardian, aptly called ''the emotional thrust of a live performance''. One or two critics here and in the United States thought Karajan held the work at arm's length; but the reading won plaudits from Mahlerians of many persuasions, for as Schoenberg observed, and as Karajan and his players so movingly reveal, ''this symphony is no longer couched in the personal tone. It consists, so to speak, of objective, almost passionless statements of a beauty which becomes perceptible only to one who can dispense with animal warmth and feels at home in spiritual coolness'' (Style and Idea, Faber, 1975).
And yet the reading continued to develop. It already had great precision, beauty and tonal clarity—all hall-marks, Schoenberg tells us, of the late Mahler style—but there was clearly more to say. Like Mahler, Karajan has been accused by some colleagues of achieving results through a super-abundance of rehearsals. But, says Schoenberg, the great conductor knows in the ninth rehearsal that there is more to say in the tenth, whereas most conductors have nothing to say after the third: ''the productive man conceives within himself a complete image of what he wishes to produce''.
All of which is germane to the present performance. In 1982, the BPO's centenary year, Mahler's Ninth was played in an unforgettable series of concerts in Salzburg, Berlin and New York. Two things were evident in the momentous first performance in Salzburg in April 1982. First, Karajan was bringing an added toughness and truculence to the opening measures of the second movement, strengthening still further an already masterly unfolding of Mahler's powerful essay in the metamorphosis of the dance. Secondly, the LP recording was no studio fabrication. Schwalbe and his men really did play the work from first note to last with a degree of technical address which, by normal standards of human perfectibility, was well-nigh incredible. As the 1980 LP recording was not in digital sound and as the reading had itself evolved, Karajan seems to have needed little persuasion to allow the taping of the final, Berlin performance in 1982, I say performance advisedly, for what we have here is a single performance, though the dress rehearsal was taped as a precaution and used (I would suspect in the concluding Adagissimo) where audience of platform noise was likely to be damagingly intrusive.
The result is again exceptional. Certainly this is the finest live performance of a Mahler symphony to have appeared on any kind of record since Mengelberg's 1939 account of the Fourth Symphony.
Interpretatively and orchestrally, it is superior to the historic live 1938 VPO set of the Ninth under Bruno Walter (World Records SH193-4, 9/74—nla). Walter never realized the concluding Adagio (on record, at least) as steadily, as lucidly, as eloquently, as dispassionately as Karajan; and the old VPO is no match for our own latter-day BPO.
Only in one respect does the old Walter recording seem preferable and that is in some degree of distance that exists between the microphones and the orchestra. Make no mistake, the digital sound on this live Berlin recording is wonderfully clear and thrillingly actual; but I am not always at ease with the conductor's-ear-view of the proceedings, though of course long stretches of the score—the ruminations and chilly declensions of the first movement, the rapt Trio of the third (fabulous violin- and trumpet-playing here) and paragraph after paragraph of the fourth—derive immense benefit from the absolute clarity and absolute quiet of the CD.
Technically, there are similar swings and roundabouts with Solti's studio recording on Decca, as EG pointed out last November. But good as the Solti is, it isn't in the Karajan class as an interpretation. Which is no disgrace, for Karajan's reading and the Berliners' playing of it—the Adagio in especial but much else besides in this latest performance—is one of the seven wonders of the modern musical world.'