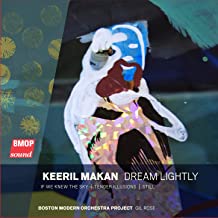 I was rather taken with Keeril Makan’s hour-long sextet Letting Time Circle Through Us (New World, 12/17). Makan’s meditative take on composition and compositional techniques was mesmeric, and there is more of the same in the four works collected here. However, one needs to adjust one’s aural focus from work to work more acutely than with most composers’ music. I confess it took me two or three playthroughs to adjust fully. The nominal title-track, Dream Lightly (2008), is a 14-minute single-movement concerto for electric guitar in which even the tuning of the instruments represents a mechanism for moving the music forwards. There is a haunting, dreamlike quality to much of it, especially the opening and closing sections with their play of harmonics.

The longest and most complex track, If we Knew the Sky (2014), is a large-scale tone poem (to use an old-fashioned term) dominated by the sound of bells – primarily a pair of vibraphones – sounding to my innocent ear like a Far Eastern temple ritual. At first hearing it seems stuck in a series of loops over its initial cadences, but as one listens closer one realises that there is more going on beneath the surface. To be honest, I think it could have been expressed in a much shorter timeframe, but its 25-minute length is part of the point.

Both Tender Illusions (2010) and Still – a concertante piece for violin, viola and orchestra (2006) – operate with much briefer (10-minute) durations. Whereas some listeners could find If we Knew the Sky outstaying its welcome, that should not be said for the companion works. The performances sound very fine throughout, electric guitarist Seth Josel the pick of the soloists, but the real stars are the Boston Modern Orchestra Project themselves. First-rate sound, too.

If We Knew the Sky