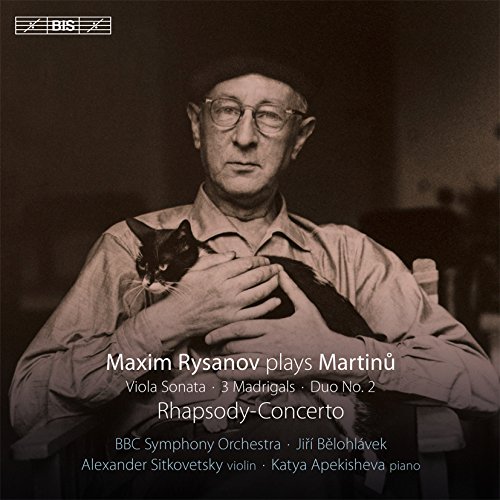 The viola player Maxim Rysanov is the star attraction in this collection of music from Martinů’s last years, during which he was on the move more than once from the United States to Europe. In 1952 he was commissioned by the Principal Viola of Szell’s Cleveland Orchestra to write a Rhapsody-Concerto in two movements, a form he favoured, and one that liberated him from more conventional structures towards ‘fantasy’, to coin his own word.

Within all four works there’s often a note of poignant nostalgia as the composer casts a backwards look to his Bohemian roots. The Rhapsody-Concerto opens in such a vein, with a lyrical string theme that returns in various guises. Rysanov plays it with great expression and there’s a spring in his step in the succeeding dance-like episodes. The slow movement follows a similar pattern, its difficulties tossed off by the soloist, the conclusion with viola against side drum a fond farewell. The BBC SO under Bělohlavek sound well in the Barbican acoustic.

The remainder of the programme was recorded at Potton Hall. Three Madrigals finds Rysanov and violinist Alexander Sitkovetsky equal partners in this inventive and engaging work. Rustic Bohemian sounds dominate the lyrical first movement of the Duo No 2, complementing the introspective slow movement before spirits are lifted in a dashingly played finale. The Viola Sonata, with Katya Apekisheva in strong support, is the most discursive of the pieces here but she and Rysanov have the measure of it. That distinctive measured dance tune at 1'44" which returns as the first movement’s coda is pure magic in their hands. A Martinů CD to play again and again.

Rhapsody-Concerto for Viola and Orchestra

Duo for Violin and Viola

Sonata for Viola and Piano