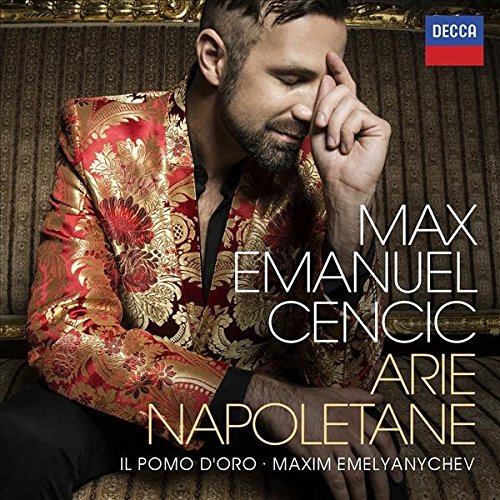 Flamboyance and intelligence don’t always go hand in hand, though Max Emanuel Cencic possesses both qualities in spades. The photographs accompanying his ‘Arie napoletane’ album show him reclining on a chaise longue, modelling – the only word one can use – the brocade jackets that have of late become his trademark platform wear. Behind the posing, however, lurks a recital of superb cogency that has claims to being his finest album to date.

He presents us with a survey of Neopolitan Baroque rarities woven into an emotionally coherent sequence that passes from triumph to resignation. He opens with Ulisse’s victory song from Porpora’s Polifemo, but its vaunting assertion and swirling coloratura soon give way to reiterated expressions of doubt, erotic conflict and sullen anger. There are arias of great beauty by Leonardo Leo (‘Del suo gentil sembiante’ from Demetrio is exquisite) and bravura showstoppers from Vinci’s Eraclea and Scarlatti’s Il Cambise. The ambiguities, sexual and harmonic, of Pergolesi’s ‘L’infelice in questo stato’ from L’olimpiade form the disc’s centrepiece, but the high point comes towards the end with ‘Qual turbine che scende’ from Porpora’s Germanico in Germania. A ‘rage’ aria complete with tempest imagery, its pulsing accompaniment links driving wind and rain with dark psychological obsessions. ‘Vago mio sole’ from Scarlatti’s Massimo Puppieno follows, terse and stark with continuo accompaniment, after which Cencic effectively bows out of his own recital, leaving Il Pomo d’Oro and their harpsichordist-conductor Maxim Emelyanychev to provide the bravura finale on their own with Domenico Auletta’s Harpsichord Concerto in D.

Cencic negotiates this complex emotional parabola wonderfully well. This is a great voice, dark in tone, beguiling in its liquidity and finely equalised. His coloratura flows with great ease, stunningly so in the aria from Eraclea, though it’s the slower numbers, where the long lines are effortlessly sustained and the emotions keenly felt, that make the disc so special. Il Pomo d’Oro are on fine form, too, and Emelyanychev, volatile, sensuous and keenly intense, is impressive. An exceptional recital, very highly recommended.