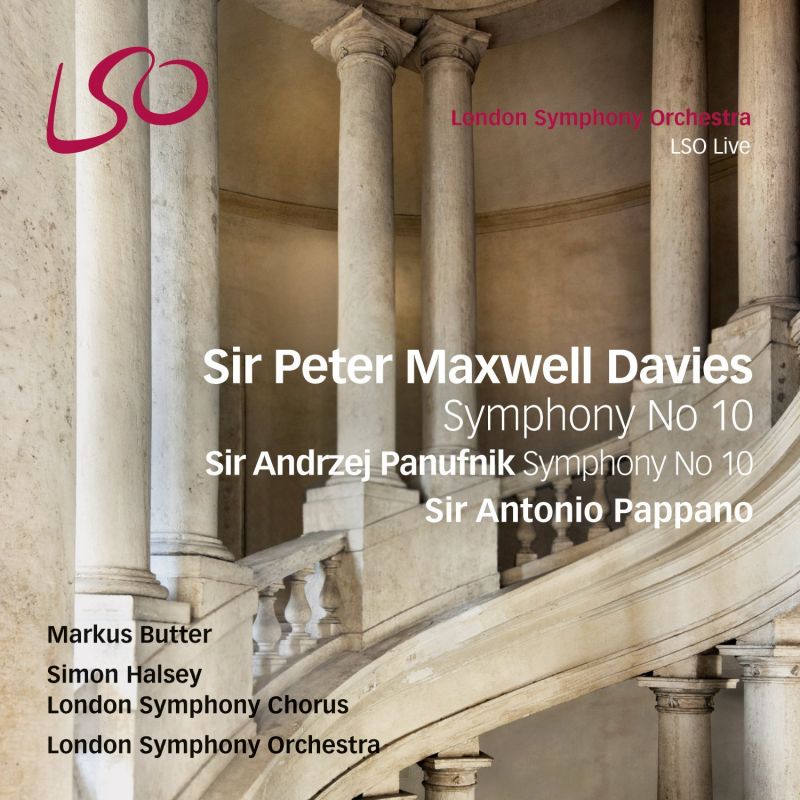 Both these 10th symphonies acknowledge the time honoured four movement prototype, yet they could hardly be more different from each other. Andrzej Panufnik’s was written in 1988 for the Chicago SO and despite its brevity has a spaciousness and energy that suggest allusions to the kind of American qualities found, for example, in Copland. Panufnik doesn’t deal in destabilising contrasts but his characteristically insistent rhythmic and intervallic patterning sustains the overall design in this late work as it moves to its quiet yet celebratory close. The sense of certainty and security brought out in this accomplished performance will seem all the more assured if heard immediately after the tensions between celebration and questioning that predominate in Peter Maxwell Davies’s Tenth (2013 14).

This four-part symphony was written during a period of hospital treatment for leukaemia; but the basic concept, as a composition ‘in search of’ the Italian architect Borromini, preceded that diagnosis. It has its roots in the composer’s time as a student in Rome and represents the latest stage of his concern to explore musical equivalents for the innovative architectural structuring he admires in Borromini. The deeply engaged gravity of the enterprise is established in the first part and intensified in the short third part, both purely orchestral. In contrast, part 2 combines a choral setting of a forceful attack on the architect’s radical ways with elements from his defence stressing his acknowledgement of the importance of musical performance in churches. Part 4 centres on Borromini’s despairing testament, written as he lay dying, while the chorus intones the names of buildings he designed.

This recording of the work’s premiere is notable for the degree to which all involved – especially the galvanising conductor Antonio Pappano and the properly operatic soloist Markus Butter – manage to convey so much of the music’s dramatic sweep as well as its symphonic substance. The divergence between the character of the vocal writing and the more complex style of the purely orchestral movements is just one of the ways in which the work challenges conventional understanding of what is symphonic, but it coheres as a profoundly personal musical statement, bringing together some of the most fundamental ideas and issues to have concerned Maxwell Davies throughout his long career.