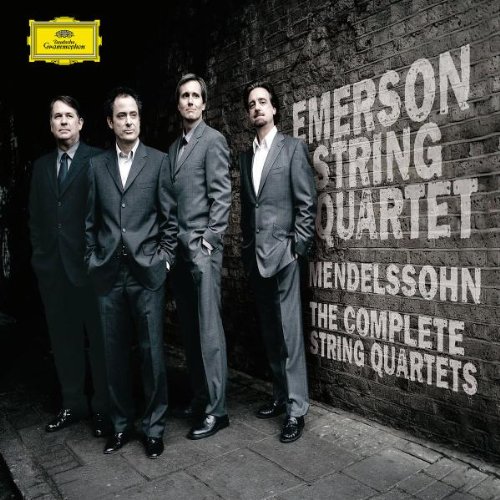 Cycles of Mendelssohn’s string quartets are no longer a rarity. The Melos, Coull and Cherubini performances are well established and the Leipzig Quartet series is unfolding. Now the Emersons issue a full cycle that includes not only the early E flat work of 1823 and the Op 81 miscellaneous pieces but the Octet, which as a recording tour de force they play with themselves, as it were.

The Emersons have much to offer. One of their outstanding qualities is a sympathy for the tensions that so often lie within Mendelssohn’s most apparently open music. They are also sensitive to the subtleties in his forms, above all in the first movements where there can lie a greater degree of emotional turbulence than is immediately evident. The Scherzo of the Fifth Quartet has a vehemence as well as a vigour, which both the Emersons and the Leipzigers discover in the fierce figuration, and which is to some degree realised with the music’s unexpected outcome in a fugue. If the Emersons’ response to the finale seems over-emphatic, this may be heard as the product of a movement that Mendelssohn marks emphatically, perhaps because the animation in the music does not seem to come from as deep as it does elsewhere in the quartets. There is, on the other hand, a delightful freshness of response to the whole of the Third Quartet (actually the last of the Op 44 set of three to have been written). The final tarantella whirls along brilliantly.

The last quartet, Op 80, Mendelssohn’s masterpiece in the form, at once sums up his preoccupations in the previous quartets and sets them in a more profound context. The modulations within a sonata form movement, which with Mendelssohn are so often colourful or elegant, here take on a darker tinge which the Emersons understand, and they play the closing dozen bars of the Adagio with a touching sadness: the composer had recently learnt of the death of his beloved sister Fanny. The Leipzigers are also very affecting in this sorrowful music, and they are stronger in the harrowing finale, with its wild modulations as if in search of a consoling security of key; and they make more of the first violin’s great cry of despair, with searing triplets plunging down from a topmost C as the other strings halt the hectic forward rhythm. This is powerfully done by both the Leipzig and Henschel Quartets.

But the Emerson set is an intelligent, perceptive, sympathetic group of performances, well-versed in Mendelssohn’s idiom and techniques. The excellent Leipzig set is still under way; meanwhle, those who opt for the Emersons will find much to reward them. I have not seen any of the accompanying booklet-notes.