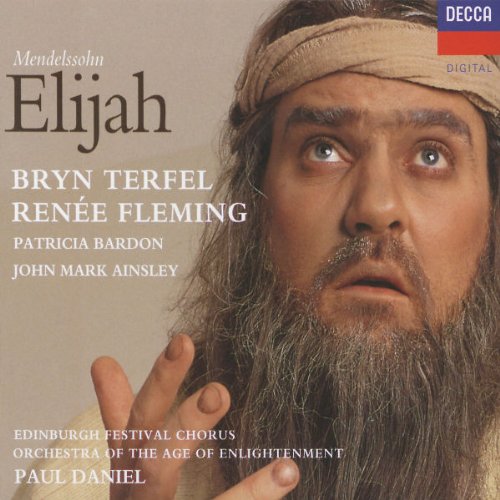 Paul Daniel and Bryn Terfel ensure that this is one of the most dramatic performances of the oratorio on disc, operatic in the best sense of the word. The young conductor, with the advantage of a period instrument orchestra and an excellent one at that, has looked anew at the score and as a consequence reveals much of the rhythmic and dynamic detail not always present in other performances, at least those available on CD in English. His accomplishment in terms of pacing and of balance is also praiseworthy, and he earns further marks for using the trio, quartet and double quartet of soloists Mendelssohn asks for in specific pieces, so as to vary the texture of the music.
Terfel simply gives the most exciting and vivid account of the prophet’s part yet heard. His range, in terms of vocal register and dynamics, is huge; his expression, mighty and immediate, befits a man of Elijah’s temperament. As the score demands, anguish, anger and sympathy are there in full measure, displayed in exceptional definition of words, and when this Elijah calls on the Lord for the saving rain, the Almighty could hardly resist such a commanding utterance. Yet there is always the inwardness part of the role demands, not least in “It is enough”: you sense a man at the end of his tether.
At the Prom performance last summer I felt that Terfel was too overbearing: here, in the studio, he has moderated his reading just enough to perfect it. If you still find his interpretation too grandiloquent then Thomas Allen on the Marriner version is a more than acceptable alternative, a smoother, more amenable but also deeply felt performance. Fischer-Dieskau on the Fruhbeck version offers a powerful reading in a similar vein to Terfel’s, but, unlike Terfel, he is inclined to sing through his tone and rant.
Where the other soloists are concerned, there is not much to choose between the two sets. Fleming sings “Hear ye, Israel” with plenty of feeling, but her tone, like Kenny’s for Marriner, is not ideally focused. Patricia Bardon’s grave mezzo is just right for the alto solos, and she just about matches von Otter (Marriner) in eloquent phrasing. Like Marriner, Daniel uses a different mezzo for Jezebel with equally successful results. Rolfe Johnson (Marriner) and Ainsley are tenors from the same school, both straight and affecting. For the concerted numbers Daniel has chosen voices that nicely match each other in timbre.
My main reservation about the new version concerns the chorus. They are alert and unanimous in both attack and well thought-through phrasing, but their actual sound is often too soft-centred, partly because all-important consonants are ignored, something given more attention by Marriner’s smaller body of, I guess, professional singers. Neither equals the more ethereal, incisive sound provided on several German versions. In both the Decca and Philips sets the chorus is – familiar refrain from myself and JBS – too recessed. In every respect the orchestral playing on the new version is exemplary.
For anyone wanting the work in the vernacular, the new set should now, by a small measure, be the primary recommendation: it will satisfy most listeners, not least because of Terfel’s characterful and irresistible portrayal.'