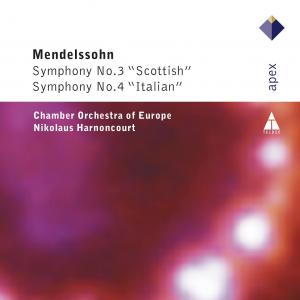 How appropriate that Harnoncourt, a conductor who through recordings has probably done more than anyone else to allow us to explore Bach's choral music, should now turn his attention to Mendelssohn; a composer who, as a conductor, was responsible in his time for the revival of Bach's fortunes, not to mention revising the Leipzig Gewandhaus Orchestra's programmes to ensure that Mozart, Beethoven, Haydn, Handel and Bach formed the backbone of the repertoire—exactly those composers, in fact, who form the core of Harnoncourt's discography.
There's no disputing that Harnoncourt's Mendelssohn is essentially Mendelssohn, but one of the stimulating features of these performances is their frequent echoes of those older classical masters, I suppose one should expect a specialist to be aware, and make us aware, of the influences, but I don't sense any conscious underlining of them; they seem to emerge naturally from Harnoncourt's superbly 'right' tempos, modern orchestral forces ('classical' trumpets excepted) that permit the type of obviously 'right' internal balances that one associates with period performance, and yet have the familiarity of tone that enables us to relate what we hear to an accumulated experience of the classics on modern instruments. Undoubtedly that same awareness of the historical perspective is to be found in Norrington's approach (EMI), but the sound of his period instruments has not yet become a large enough part of that accumulated experience. The more traditional warmth, suavity and brilliance of Abbado's accounts (mid-price DG) offer a no less compelling but rather more generalized experience.
Pigeon-holing our three contenders is dangerous. It would be tempting to say that Harnoncourt, with his modern instrument orchestra, playing in an 'historically aware' manner (shorter, more eventful phrasing; rationed vibrato; horns that rasp like their valveless antecedents; and sharply defined timpani) occupies the ground between the apparent poles of the 'traditonal' Abbado and that 'authentic' avenger, Roger Norrington. As it happens, comparison of all three in the Italian does confirm a few expectations, but just as often it doesn't. If faster tempos are thought to be a characteristic of 'authenticity', then it is interesting to find that, with the exception of the third movement, Harnoncourt is slower than Abbado throughout, and in the presto finale Norrington is the slowest of all.
And how well Harnoncourt has chosen his speeds here, not only for ease of articulation (essential for that graceful, tripping, light-as-air quality unique to Mendelssohn) but to enable him to attend to the music's moods and illustrative poetry; the Pilgrims' procession (second movement) a reverential tread after the markedly con moto manner of both Abbado and Norrington; and though the finale is swift, instead of Abbado's exhilarating whirlwind, Harnoncourt reminds us of its minor key—its ambiguity is caught to perfection.
Imposingly solemn wind harmonies open the Scottish; here is the weathered, exposed stone of the ruined Holyrood chapel (and its sacred 'aura', absent at Norrington's faster pace). Abbado's violas tend to dominate the scene, adding, perhaps, an inappropriate warmth; and how memorably Harnoncourt shapes the theme's transformation at the start of the Allegro, retaining some of its original dynamic gradation. In both symphonies I miss the clearly divided first and second violins that so enliven the textures in Norrington's accounts, but, unless it is a trick of the acoustic, Harnoncourt separates his horns(!)—to magnificent effect when they open up in the finale's coda. A few minor adjustments to the score suggest Harnoncourt may have researched original sources; for example, the addition of trumpets to the timpani in bars 143-4 at the close of the Adagio (I've not yet seen any accompanying notes).
Space does not permit itemizing the individual wonders of the COE's playing, and the sound can simply be described as effortlessly natural. On to Schubert and Schumann, please.'