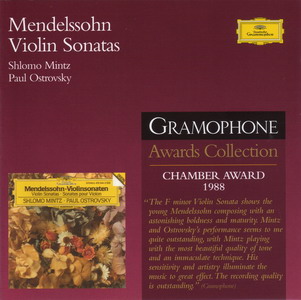 Mendelssohn's F minor Violin Sonata bears the influence of Beethoven and Mozart, and this is perhaps what one would expect of a composer in his early teens writing during the 1820s. But the sonata is a great deal more than a derivative apprentice piece: in fact it shows the young Mendelssohn composing with an astonishing boldness and maturity. The influences are there, and no attempt is made to conceal them, but they are absorbed and translated into a style which has a distinct personality of its own. One previous LP recording of the work, by Jaap Schroder and Christopher Hogwood (L'Oiseau-Lyre florilegium DSLO571, 4/81—nla) rather prettified and trivialized the music, but Mintz and Ostrovsky clearly have much more respect for its character and substance, and theirs is a strong, serious approach. Indeed, their performance seems to me quite outstanding, for not only does Mintz play with the most beautiful quality of tone and an immaculate technique, but his sensitivity and artistry illuminate the music to great effect, while Ostrovsky's contribution is equally distinguished.
Similar qualities of performance inform the later F major Sonata, written when Mendelssohn was a mature young man of some 29 summers. This sonata lay in unpublished obscurity until 1953, when Sir Yehudi Menuhin edited the work, recorded it on LP for EMI, and caused it to be published. Here, Mendelssohn's mature style is of course evident, yet the listener may perhaps feel that the composer's fires of inspiration burned a little less brightly than they had 15 years earlier. Yet it's an enjoyable work, and good to have in such a high-class interpretation as this. Sadly LP and cassette users will not be able to buy these performances, for they are issued on CD only. The recording quality is outstandingly warm and natural.'