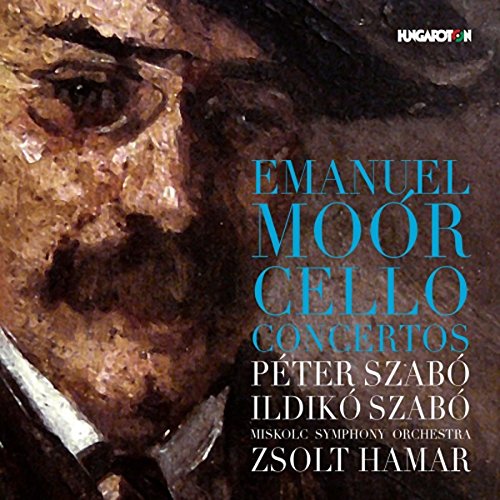 'Almost completely forgotten’, says the booklet-note about Emanuel Moór (1863-1931), thus relieving the pangs of guilt within those of us to whom the name is new. Listening to Moór’s C sharp minor Cello Concerto and the D major Double Cello Concerto, it is hard to place the idiom geographically. A touch of Brahms, perhaps? A pungent turn of phrase that suggests an origin further east? On the evidence of these two works, one would scarcely put him down as quintessentially Hungarian, though the slow movements of both concertos do have the aura of an elegiac folk melody. Elsewhere, his national identity, with well-nourished Romantic roots, was perhaps diluted into a fairly anonymous cosmopolitanism through his extensive European peregrinations but his travels seem not to have taught him much about creative discipline or sustaining a strong thread of ideas through his music.

His career prospered, however, by dint of a close association with Pablo Casals and with Anatoly Brandukov, for whom Rachmaninov wrote his Cello Sonata. Hence these cello works; but, despite winning moments, both concertos lose their way at one time or another. That is no slight on these fine performances by Péter and Ildikó Szabó in the Double Concerto and Péter Szabó alone in the C sharp minor. They, together with a well-honed orchestra, tap the music’s lyrical and athletic seams with terrific aplomb; but Moór, by nature apparently irascible and blunt, is unlikely to have warmed to any criticism that might have rendered these concertos more cohesive.

Concerto for 2 Cellos and Orchestra

Prelude for Cello and Orchestra