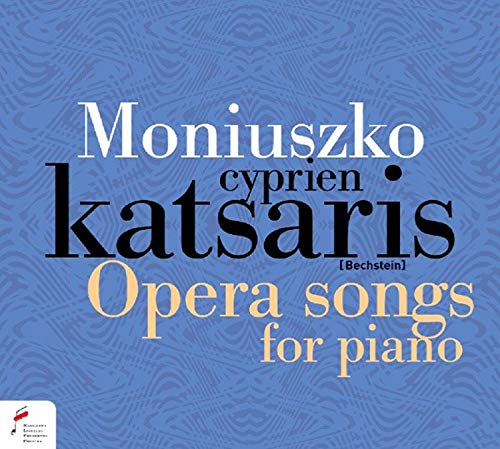 Moniuszko? ‘Opera Songs for Piano’? Really? And then a dim light flickers, a quick google confirms – and, yes, there it is: Tausig’s Fantasy on Themes from Moniuszko’s ‘Halka’, recorded by Michael Ponti back in the 1970s for Vox Candide. Your reviewer retrieves his copy from the shed and reminds himself a) what a superb LP it is (yet to be reissued in its entirety on CD), and b) what a coruscating showpiece the Fantasy is. To bring it off you need a Hamelin, a Yuja – or a Katsaris. Which leads me to this charismatic pianist’s latest voyage of discovery and to wonder why he did not take the opportunity to revive Tausig’s Halka Fantasy, especially when the one here by Józef Nowakowski (1800 65) is such a poor, lumpy substitute.

The disc actually begins with two transcriptions, the first by Moniuszko himself, of a Mazurka and Polonaise from Halka. It is not that they are terrible or third-rate, but just that they are so unexceptional – pleasant enough but instantly forgettable. After the Halka Fantasy, the longest work (10'19") by a margin of several minutes, comes a succession of short dance-based numbers of similar interest, so that by track 12 you realise that Moniuszko’s piano music, whatever else he wrote and despite the easy fluency of Katsaris’s playing, needs careful cherry-picking.

Occasionally, inspiration strikes: a transcription by Nicolai von Wilm (1834-1911) of ‘The Spinner’ (or ‘The Spinning Girl’) followed by another by Eugèn de Westh of ‘L’allouette’. Either of them would make effective encores; but again the former is far better served by another transcription, to wit Henryk Melcer’s, which you can hear on Felicja Blumental’s enchanting recital of the same name released in 2005 (Brana, 10/05).

The remaining 10 tracks offer the same mix (a lovely little waltz in E flat minor and a fine transcription of ‘Le Cosaque’ are among the best). But if, ultimately, I cannot quite match Katsaris’s enthusiasm for the Polish composer, who, on the bicentenary of his birth, is to deny him this beautifully played tribute with its outstanding presentation and genial, informative booklet in four languages?