Mozart and the Weber Sisters 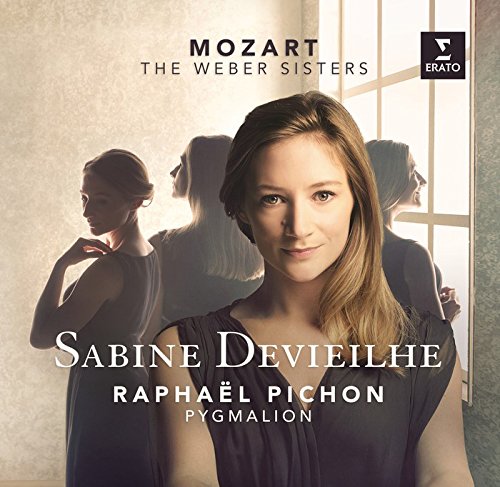 ‘A Mozartian hotch-potch’ was my uncharitable first reaction when I glanced through the contents of this disc. Eating humble pie, I confess to thoroughly enjoying this ‘portrait de Mozart amoureux’, as French soprano Sabine Devieilhe dubs it: music associated with three of the four Weber sisters, of whom Aloysia (Mozart’s first love) and Josefa (the first Queen of the Night) were professional singers, and Constanze his wife. On the whole, the mixed-media sequence of arias, songs and instrumental pieces, rare (including a shrouded ‘Canonic Adagio’ for two basset horns and bassoon) and familiar, works well, even if several have only the slenderest connection to the Webers.

Launched by a fizzing account of the overture to the Paris ballet Les petits riens, the programme centres around three magnificent showpiece arias for Aloysia, famed both for her expressive cantabile and her coloratura prowess. Among her specialities were sustained pianissimo high notes; and I can’t imagine they were more delicately floated than they are by Sabine Devieilhe, a lyric coloratura who combines a pure, sweet timbre and dazzling virtuosity. Although her Italian consonants could be sharper, Devieilhe also has a keen dramatic sense. In sympathetic dialogue with the oboe, she realises all the tenderness and agitation of ‘Vorrei spiegarvi’ (where the lovelorn Clorinda has fallen for the ‘wrong’ man); and in the spectacular ‘Popoli di Tessaglia’ she catches each fluctuation of Alceste’s grief and protest in the opening recitative, then flies off into the stratosphere (up to top G, capping even the Queen of the Night’s F) without shrillness or strain. The period orchestra are vivid accomplices, though with the voice forwardly recorded, wind detail can suffer in the balance.

In one of her signature roles, Devieilhe despatches the Queen’s ‘Der Hölle Rache’ with terrific pizzazz, her poise in alt even enabling her to shade the high-wire coloratura at will. You’ll hear more sheerly powerful accounts of this warhorse, but few more brilliantly sung. Elsewhere Devieilhe makes the coyly risqué little ariette ‘Dans un bois solitaire’ into a miniature drama, and brings a smiling simplicity to ‘Nehmt meinen Dank’, Mozart’s last music for Aloysia. I confess I could have done without the Solfège, the singing exercise he wrote for Constanze as a preparation for the ‘Christe’ of the C minor Mass. And, pace the informative booklet-note, it’s unlikely that the unfinished ‘Et incarnatus’ – or indeed any of the Credo – was performed in St Peter’s Abbey in Salzburg in 1783. Still, I’m not complaining when it’s sung with such radiance and grace, at a tempo that brings out the music’s pastoral lilt. If you expect the disc to end here, as it says on the tin, be prepared for a shock. It might initially have you spluttering. My guess is that it would have tickled Mozart’s famously antic sense of humour.

Mozart and the Weber Sisters