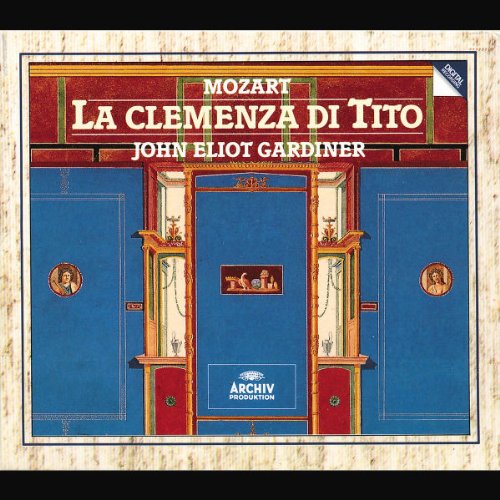 Listening to this work so soon after hearing Zauberflote one is amazed anew that Mozart could write two such totally contrasted pieces within months of each other. Here, in the composer's last opera seria, we are in another world, one of formality tempered by the deep emotions engendered by love and jealousy. Instead of birdcatchers and Masonic rights we are dealing with historic figures in a supposedly historic context with down-to-earth feelings. For each Mozart finds precisely the appropriate music.
There is a further contrast here. In the Flute reviewed on page 129, we hear modern instruments recorded in an empty hall, and sounding so. Here we are present at a live performance on period instruments. The difference in dramatic electricity is most marked. As anyone who was present at the Queen Elizabeth Hall on the evenings from which these discs derive, the sense of dedication and a taut drama unfolding was palpable. That has been carried over in the CDs. As with his Award-winning Idomeneo (see page 44) Gardiner favours brisk rhythms, alert, prominent wind and brass, swift tempos. Yet in the great set-pieces there is more than enough time for expressive phrasing and licence for the singers to use rubato when they wish. Above all there is an overriding sense of a true ensemble with chorus, orchestra and soloists in complete harmony.
Comparisons are hardly relevant when the whole approach here is so much lighter, more period-orientated than in the rival versions. They are all convincingly cast—the piece seems to draw the best from its interpreters—but none is superior, though one or other is in some respects the equal of the one assembled here. Schreier for Bohm (DG) is as affecting and, in Act 2, as mentally tormented as Rolfe Johnson, who completes a double with his other anguished ruler, Idomeneo. He makes a convincingly clement Emperor and one rightly amazed at his best friend's treachery—listen to the accompanied recitative near the beginning of Act 2 to judge how sympathetically he accents notes and words. His account of ''Se all'impero'', that properly trenchant exposition of Tito's credo, is technically assured. As in Idomeneo Rolfe Johnson is more than worthily partnered by Anne Sofie von Otter as Sextus. The rapport between them is heartening. Von Otter also scores strongly in accompanied recitative, the passage after Sextus has set the Capitol alight and becomes full of doubt and terror. Sextus's arias have had some splendid performances in previous sets, notably from Teresa Berganza on the Kertesz (Decca) and Bohm versions, but nobody seems as fleet in her runs, so subtle in using them for emotional expression as von Otter. She is also a wonderful purveyor of the text's meaning. Her voice is nicely contrasted with the rather slimmer tones of Catherine Robbin as Annius, who is another Mozartian stylist of substance.
Julia Varady, who was Bohm's Vitellia, is even more enthralling here. She manages to be at once bitingly jealous, manipulative, sensual and in the end remorseful, her very individual soprano used to create a rounded, complex character. As with Rolfe Johnson and von Otter her treatment of dry recitative is arrestingly vital. Her reading culminates in an accomplished account of ''Non piu di fiori'', untroubled by its low-lying phrases. Sylvia McNair, singing with her customary sweetness as Servilia, sacrifices character to purity of tone; in a word her singing is bland. The admittedly dull role of Publio is not helped by Cornelius Hauptmann's woolly singing.
Gardiner cuts much more recitative than Sir Colin Davis (Philips) who offers the fullest text recorded. As it isn't by Mozart that's of small consequence except where we are here thrust too suddenly into the trio ''Quello di Tito'' in Act 2. The Monteverdi Choir offers just the right urgency and compact sound. One or two slightly ill-kempt passages apart, the playing is as disciplined as it is attentive to keenness of phrasing. The obbligato players are all masterly. We have execution on period instruments that surely must banish all doubts about their use in Mozart. For that reason alone this would now be my recommended version, but to compound pleasure and satisfaction, Mozart's music-drama, once considered marmoreal, here sounds worthy to stand alongside Idomeneo in the opera seria canon. It should win even more friends for the piece.'