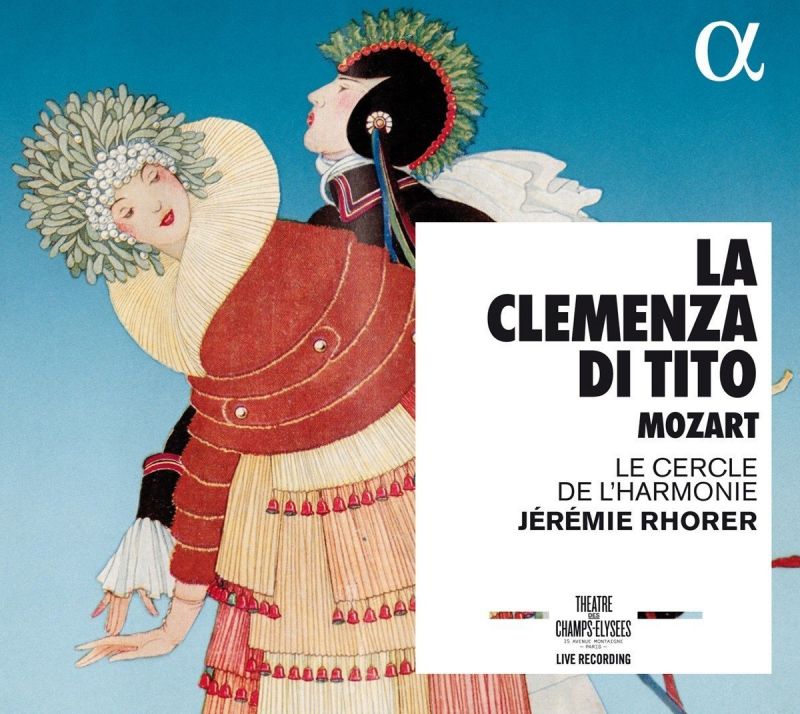 By all accounts, Denis Podalydès’s updated production of Mozart’s late opera seria in the Théâtre des Champs-Elysées, set in a 1930s hotel, was an agglomeration of modern directors’ clichés. But, as so often, the music was far better served, as we can hear in this live recording. Jérémie Rhorer confirmed his Mozartian sympathies in his recent Entführung (9/16); and except for the odd controversial tempo at both ends of the spectrum (as in the hell-for-leather end of Sesto’s ‘Parto, parto’), conducts Mozart’s score with an acute feel for its distinctive tinta and rhetoric. Rhorer is alive to the serene, classical beauty and nobility that made Tito one of Mozart’s most popular works in the decades after his death. Yet from the moment the Overture tumbles into the dialogue between the hopelessly smitten Sesto and the overwrought Vitellia, we sense that this will be a performance of life-and-death intensity. Recitatives, in particular, are as alive as in any recording I know, animated by the swirling, smouldering fortepiano, which, like the even more flamboyant continuo in René Jacobs’s recording, becomes a hyperactive commentator on the drama.

Much of the success of La clemenza di Tito hinges on the performances of the singers playing Vitellia and Sesto. Karina Gauvin and Kate Lindsey do not disappoint. Both present credible, vulnerable characters, vivid both in their soliloquies and their interaction. Gauvin may lack the sulphurous chest notes and dangerous sexual allure of Alexandrina Pendatchanska for Jacobs, yet her Vitellia, balancing neurotic hauteur with a sense of classical style (never Pendatchanska’s forte), is superbly sung and powerfully acted (though I could have done without the cackles of derisive laughter in Act 1). Few sopranos in the role match her combination of agility, vocal grandeur and subtle phrasing, not least in the tender, rueful opening of her final scena, ‘Non più di fiori’. If Lindsey, with her supple, glowing mezzo, is stretched by the precipitate tempo at the close of ‘Parto, parto’ (where the superb obbligato clarinet is unfazed), hers is another finely sung, intensely ‘lived’ performance. Both her big scenas, poignantly charting each phase of Sesto’s anguished vacillations, rightly bring the house down.

Vastly experienced both as Idomeneo and Tito, Kurt Streit’s lyric tenor still sounds sweet when he sings softly, as in his opening aria, though it now grows tight under pressure. It is always a challenge for the singer to make much of the character of Tito, as much a symbolic ideal as an individual. But Streit convincingly embodies both the Emperor’s innate goodness and his agonies over the conflicting duties of office. The minor but crucial roles of Annio and Servilia are well taken by the rich-toned Canadian mezzo Julie Boulianne (deeply touching in Annio’s plea to Tito to spare Sesto’s life) and the crystalline soprano Julie Fuchs. Fuchs’s exquisite shaping of Servilia’s ‘S’altro che lagrime’ – music poised between Zerlina’s ‘Vedrai carino’ and the Adagio of the Clarinet Concerto – makes this aria the true Mozartian moment of redemptive grace. The orchestral sound is a shade dry, and you’ll have to put up with intermittent stage noise. Yet while Jacobs’s thrilling performance – too eccentric for some, I know – would still be my first choice, Rhorer’s is a vivid, dramatically compelling addition to the impressive Tito discography.