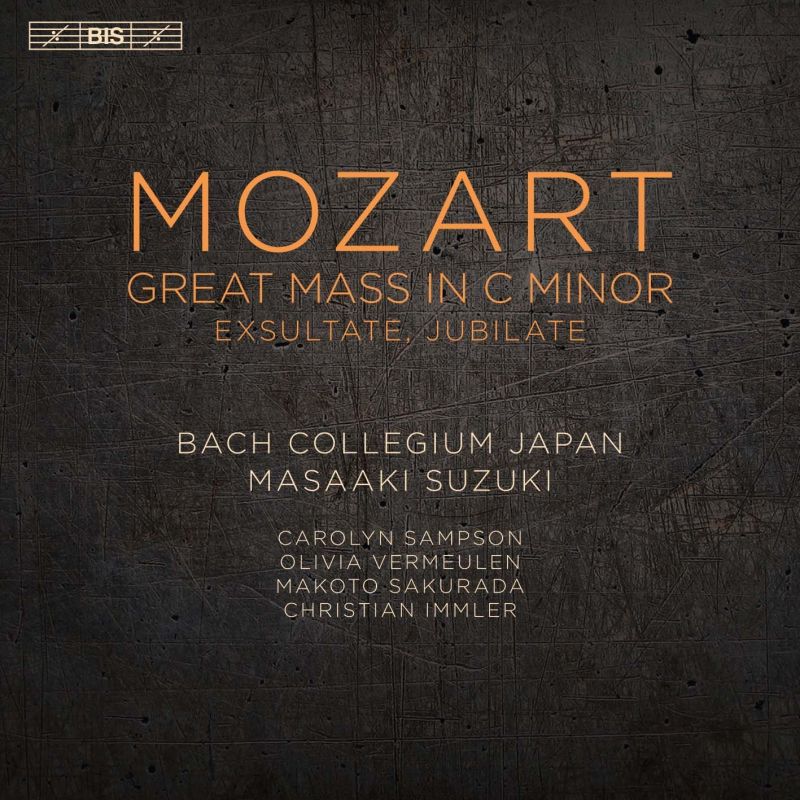 Period-instrument C minor Masses get better and better. The bar was set in the mid 1980s by Gardiner and Hogwood, then raised in the new millennium by the likes of McCreesh, Krivine and Langrée. This new recording from Japan, which joins Suzuki’s scholarly and startling Requiem, is fully worthy to join them. Reviewing the Requiem (1/15), I was disappointed that the acoustic and engineering blurred the inner voices, obliterating Mozart’s (or Süssmayr’s, Eybler’s or Suzuki Jnr’s) counterpoint. Here that problem is largely avoided in a similarly grand acoustic: that, and the fact that the C minor Mass is a far more vocally orientated piece than the Requiem.

The choir are well drilled and the two female soloists are matched as well as any on disc (see my Collection on the work, 6/13). Carolyn Sampson takes the bulk of the soprano solos (the ‘Laudamus’ is taken by the second soprano, Olivia Vermeulen, as is traditional) and does so with the lithe coloratura, rich, silky tone and innate identification with this music familiar from her sacred Mozart collection with The King’s Consort (Hyperion, 5/06), and intertwines memorably with Olivia Vermeulen in the duet and trio of the Gloria. Suzuki is no speed merchant (a full minute slower than Langrée in the Kyrie, for example), and maintains the through line in more strenuous movements such as the ‘Qui tollis’ and the ‘Cum Sancto Spiritu’ fugue that closes the Gloria. He takes his time especially in the ‘Et incarnatus est’, its beautiful pastoral scene spun out mesmerisingly by Sampson.

The edition used of this tantalisingly incomplete work is that by Franz Beyer, published in 1989. There is nothing here to discombobulate the general listener; however, those for whom such matters are important will wish to know that there are no (editorial) trumpets in the ‘Credo’ or horns in the ‘Incarnatus’, whose new string parts are perhaps more active than those in the more usual HC Robbins Landon completion. (Beyer also contrived an Agnus Dei from the music of the Kyrie but that is not recorded here.) As the only other recording of this edition is Harnoncourt’s, whose peculiar balance between voices and instruments is a sticking point, it is worthwhile to hear Beyer’s work on this disc.

Sampson is once again the soloist in the popular Exsultate, jubilate, the treat here being a parallel recording of the opening aria in the ‘Salzburg’ version, which boasts a different text and flutes instead of oboes. As a package, the disc as a whole is certainly a winner; the Mass easily ranks alongside the period-instrument benchmarks. [This review has been updated to take in a correction about the singers in the ‘Laudamus te’ – Ed]