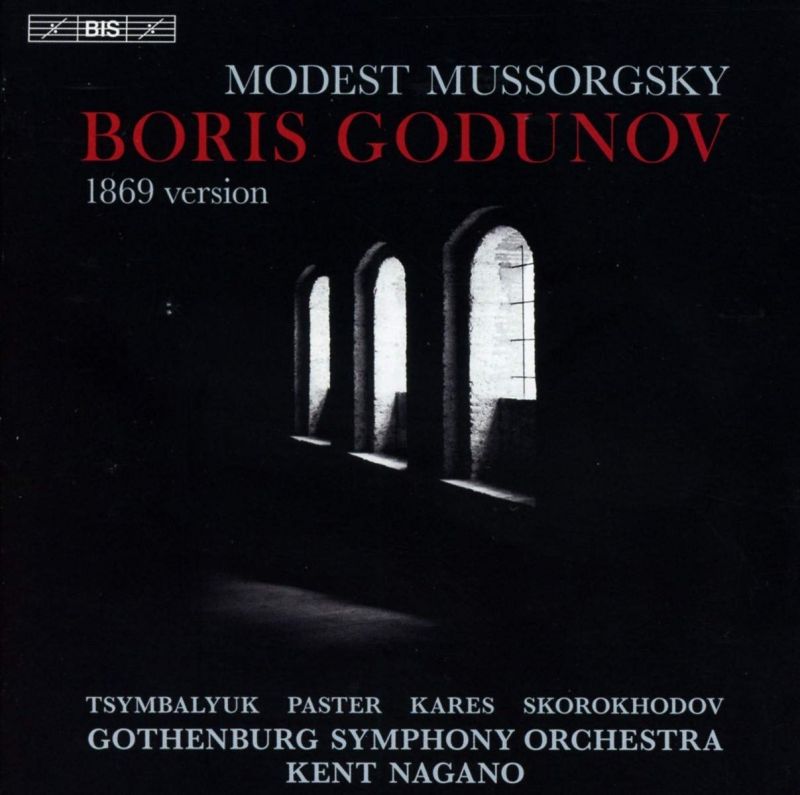 Confession time. Although it’s deeply unfashionable to admire Rimsky-Korsakov’s cosmetic surgery on Mussorgsky’s Boris Godunov, I admit to loving it. Plushly scored, it’s on a lavish scale, full of Russian grandeur as gaudy as the onion domes atop St Basil’s Cathedral. Without Rimsky’s salvage job, Boris wouldn’t have gained a foothold in the operatic canon, yet now it ranks as one of the greatest Russian operas. I wouldn’t be without André Cluytens’s recording (EMI/Warner, 9/63, 6/03) with Boris Christoff taking not just the title-role but also the chronicler-monk Pimen and the vagabond Varlaam for good measure.

However, companies have now largely reverted to Mussorgsky’s own sparer, more rugged orchestration and some directors have even adopted the 1869 original, including Richard Jones in his Covent Garden co-production with the Deutsche Oper Berlin. That’s the version recorded here by Kent Nagano and the Gothenburg Symphony Orchestra on BIS, captured in concert in March 2017. It’s only the second time it’s been recorded, following Valery Gergiev’s bumper five-disc set with the Kirov (Mariinsky) Opera which set down both the 1869 version – rejected by the Imperial Theatres in St Petersburg – and the 1872 revision.

In that revision, Mussorgsky was persuaded to add some love interest – introducing the sumptuous Polish act where the Pretender (Grigory) falls for Princess Marina Mnishek and the political machinations of her Jesuit priest, Rangoni. The composer also altered the sequence of some events and fleshed out female characters such as the Innkeeper and the Nurse, so it’s a very different work than originally conceived.

Nagano keeps Mussorgsky’s musical argument taut and the playing of the Gothenburg SO is very fine, even if he irons out some of the score’s crumpled earthiness. The recording is surprisingly gauzy, with solo voices caught beneath a reverberant halo. With Gergiev, the listener is plunged into the ‘bells and smells’ of the Coronation scene but Nagano and the BIS engineers keep you at a respectful arm’s length. Not that the singing of the Gothenburg Opera Chorus is in any way found wanting – their contributions are among the chief glories of this new set – but I’d like them to have been more to the foreground. The chorus in Boris is, frankly, one of the main characters.

Nagano has gathered together an excellent, largely Russian cast, led by Alexander Tsymbalyuk’s Boris, his soft-grained, beautiful bass sounding youthful if under-characterised. There are none of Christoff’s histrionics, although some may consider that an advantage, nor the vivid word-painting of the gritty bass-baritone Nikolai Putilin for Gergiev. But Tsymbalyuk is moving and sincere.

Mika Kares’s sculpted bass makes for a sonorous Pimen, while Sergei Skorokhodov is an excellent Grigory, with a heroic ring to his tenor. Alexey Tikhomirov is suitably rabble-rousing in Varlaam’s song about Ivan the Terrible’s siege of Kazan and tenor Maxim Paster is an insinuating Shuisky, if not as slippery as the reedy Konstantin Pluzhnikov on the Kirov recording. Boris Stepanov is an eloquent, un-wheedling Holy Fool.

Although the Gergiev recording is preferable, it’s only by a slim margin and its availability is tricky (Universal only saw fit to reissue the 1872 version), so if you have a preference for the 1869 ur Boris, then Nagano and the Gothenburgers should suit your requirements rather well.