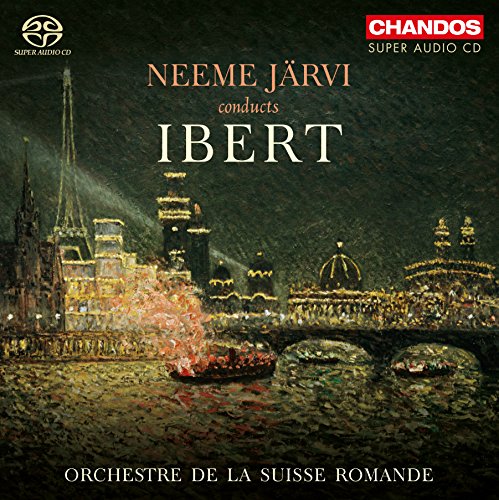 Ibert always claimed he followed no compositional schools or aesthetic movements, though his reputation is hampered by charges of eclecticism, and his work between his gravitation towards post-Impressionism (Ravel was a close friend) and a fondness for the jazz inflected modernism of Les Six (Milhaud and Honegger were fellow composition students).

Neeme Järvi examines the apparent contradictions by contextualising his two best-known works, the Debussian Escales… (1920), inspired by Mediterranean ports of call during Ibert’s First World War naval service, and the popular Divertissement of 1930, derived from his incidental music for a production of Eugène Labiche’s An Italian Straw Hat. Järvi gives us a darker Divertissement than usual. The humour is mordant rather than breezy, the tone at times acerbic. But the shimmering Nocturne, with its poised piano solo, transports us into a sensual world more fully explored in Escales…, and the latter gets one of its finest performances on disc, superbly nuanced, and quite exquisitely played.

It’s the rest of the CD, though, that makes it special. The Suite symphonique, ‘Paris’ swerves garishly between the mechanism of Pacific 231 and the classiest of foxtrots and waltzes in its depiction of a teeming metropolis. The sad, haunting Sarabande pour Dulcinée comes from the soundtrack for George Pabst’s 1933 film Don Quichotte, originally offered to Ravel, who was too ill to undertake it. Ibert was also a master of the pièce d’occasion, and Järvi includes the riotous Bacchanale, written to mark the 10th anniversary of the Third Programme – one wonders just what the BBC made of it – and the grandiose Ouverture de fête, commissioned in 1940, alongside Strauss’s Japanische Festmusik, for the 2600th anniversary of the founding of the Japanese imperial dynasty. Ibert emerges from it all as a fine composer, whose unity lies in his almost impudent diversity, and who is often far from frivolous as some have maintained. And the disc allows Järvi to show off his Swiss orchestra to perfection. Very fine.