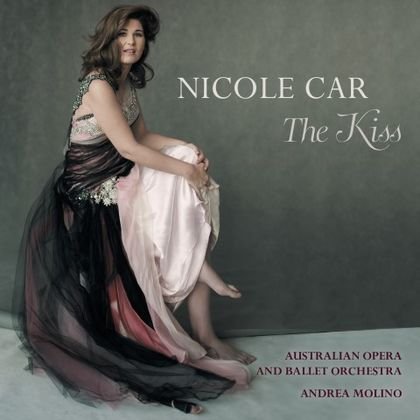 This is a timely release from ABC Classics. The Australian soprano Nicole Car made her Royal Opera debut last autumn, as a touching Micaëla before starring as Tatyana. Both roles feature on this cannily programmed disc – a mixture of well-loved classics and a few specialities. Essentially a calling card, it demonstrates Car’s ability in rarer Russian and Czech repertoire, the extract from Smetana’s The Kiss lending the disc its title.

She begins the disc boldly, with Marguerite’s Jewel Song – just the sort of repertoire one associates with her compatriot Dame Joan Sutherland, but Car’s is a lighter instrument. She possesses a lovely lyric soprano, not a glamorous sound, but full of dewy freshness, nowhere more so than in Mimì’s aria, where the voice has a rosy bloom. Her Mimì is very much the ‘girl next door’ and she ends with a charming final line. Micaëla has a similar innocence. Her Thaïs shows promise, although the raw final note on the optional high D on ‘éternellement’ should have been retaken.

While the role of Leonora in Il trovatore would seem on the heavy side for Car at present, she is aided in ‘Tacea la notte placida’ by conductor Andrea Molino, who takes the aria quite swiftly. The cabaletta sparkles. Car discovers darker colours in Amelia’s ‘Come in quest’ora bruna’ from Simon Boccanegra, although it’s a bit of a trudge, the seabirds wheeling rather deliberately along Genoa’s coastline.

Tatyana’s Letter Scene is packed with emotion and meaning in something approaching a signature role. Among the rarities, Rimsky-Korsakov’s Servilia is a delight, although it’s a shame the aria from Tchaikovsky’s The Oprichnik is relegated to the download version of the album only.