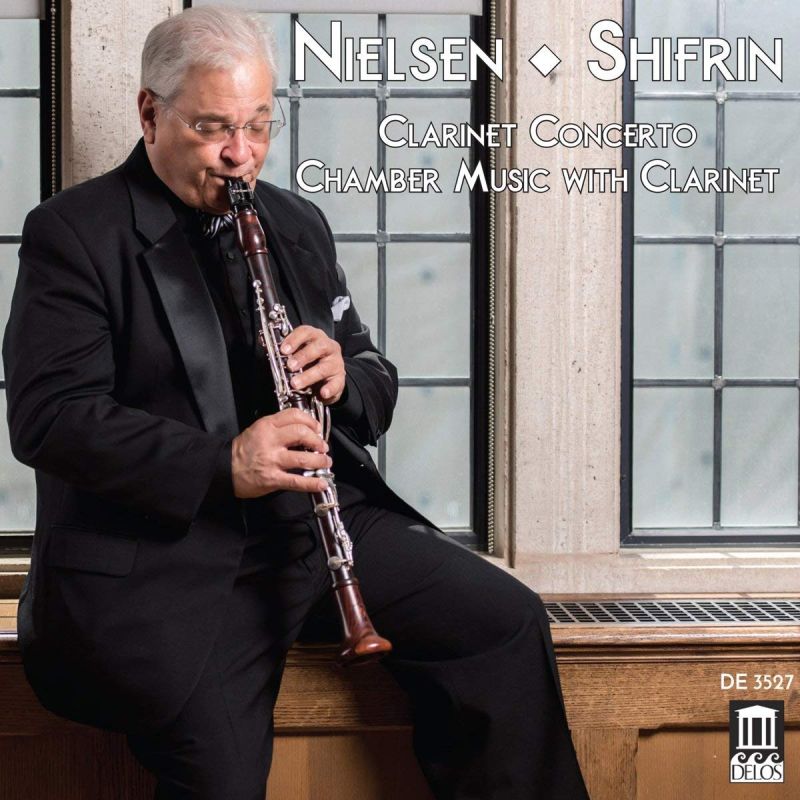 Because Nielsen’s Clarinet Concerto is sparsely scored for two bassoons, two horns, snare drum and string section, the music readily lends itself to chamber downsizing for one instrument per part. If anything, René Orth’s skilful adaptation transforms the chamber-like repartee between soloist and ensemble into a fully fledged equal partnership, especially in regard to the nimble first violin part and that pesky doppelgänger of a snare drummer. In passages where Nielsen calls for two bassoons (the return to Tempo I following the first clarinet cadenza, for example), the horn simply fills in, and vice versa.

Equal partnership, of course, means equal responsibility, and each participant in this premiere recording contributes on the highest level. In turn, Nielsen’s challenging clarinet-writing poses no problems whatsoever for David Shifrin’s seasoned mastery. His prodigious breath control and effortless legato phrasing make light of the composer’s more fanciful flights, yet he’s not afraid to rough up his tone in climactic fortissimos or in his combative exchanges with Jon Greeney’s expert snare drum virtuosity. In this sense, Shifrin’s interpretation reconciles the suave demeanour of Sabine Meyer, Martin Fröst and Anthony McGill with the more daring and volatile Stanley Drucker and Olie Schill (the latter’s BIS recording with Myung-Whun Chung and the Gothenburg Symphony Orchestra is my version of reference).

The remaining works are more than mere fillers. I’ve never heard so robustly characterised a performance of the delicious Serenata in vano for clarinet, bassoon, cello and double bass, not to mention these lovingly nuanced readings of the early Fantasy and two Fantasy Pieces (beautifully appropriated by Shifrin from the original oboe part). And Steven Cohen’s arrangements of the Six Humorous Bagatelles transform these simple solo piano teaching pieces into ideal encores. Great sound, great annotations, great programming and great musicianship can only mean one thing: buy this disc!