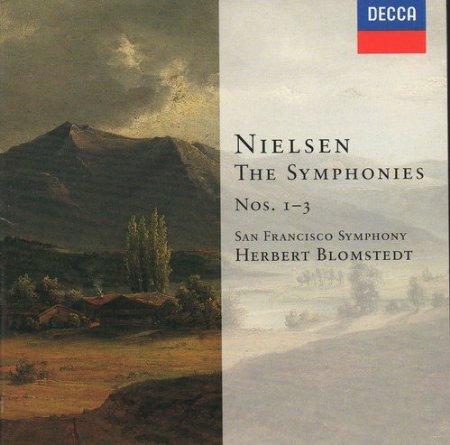 Only last February, I was discussing the new CBS recording of The Four Temperaments from Esa-Pekka Salonen and the Swedish Radio Symphony Orchestra. Not long afterwards a reader wrote: ''As you gave a 'warm welcome' to Salonen's CD I thought I'd buy it but am moved, I fear, to write and say that I think it's just awful''. He went on to say he found the first movement ''too hectic'', the third too slow, added to which comes ''a lack of warmth in the phrasing and playing generally.... So this is a record I'll be getting rid of''. I would agree that the performance is not free from the exaggeration to which this young conductor is given in Nielsen but Salonen's impulsive, headlong opening, ''breathless with anger'' certainy captured the choleric character of the first movement (as, for that matter, did Bernstein's old CBS version–due for reissue very soon) and the performance generally struck me as a good deal better than earlier issues in the cycle—as indeed it would need to be! However, if I recommended it, albeit not in preference to MyungWhun Chung's Gothenburg performance on BIS/Conifer (nor, I should have added, Ole Schmidt's Unicorn-Kanchana disc), this newcomer is superior to either of the Swedish accounts.
Herbert Blomstedt finds the tempo giusto in the first movement—there is splendid concentration and fire, and as usual from the right pace stems the right character. Moreover, I wonder whether the orchestra is not at an early stage of discovering this music for there is a genuine excitement about their performance, which was less in evidence in Blomstedt's earlier Danish account on EMI (nla). There is no lack of warmth in their playing though the acoustic of the Davies Symphony Hall imparts a slight chill to the upper strings.
Of course Blomstedt is an experienced guide in this repertoire and it tells, particularly in the Espansiva, which has greater depth than Chung (BIS/Conifer) or his own earlier EMI account (nla). The tempo giusto for the finale which eluded such artists as Bernstein (CBS—due for reissue) and Francois Huybrechts (Decca—nla) feels just right here. And it is the underlying current on which this music is borne, that is so expertly judged. In fact right from the beginning I found my old enthusiasm for this genial symphony rekindled anew. Blomstedt's is an affirmative, powerful reading and although in the slow movement, the soprano's vibrato may not be to all tastes, she produces the required ethereal effect and the baritone, Kevin McMillan, is also fine. I have one small reservation in that I do find the

Symphony No. 2, '(The) Four Temperaments'