Norma Fisher at the BBC Vol 1 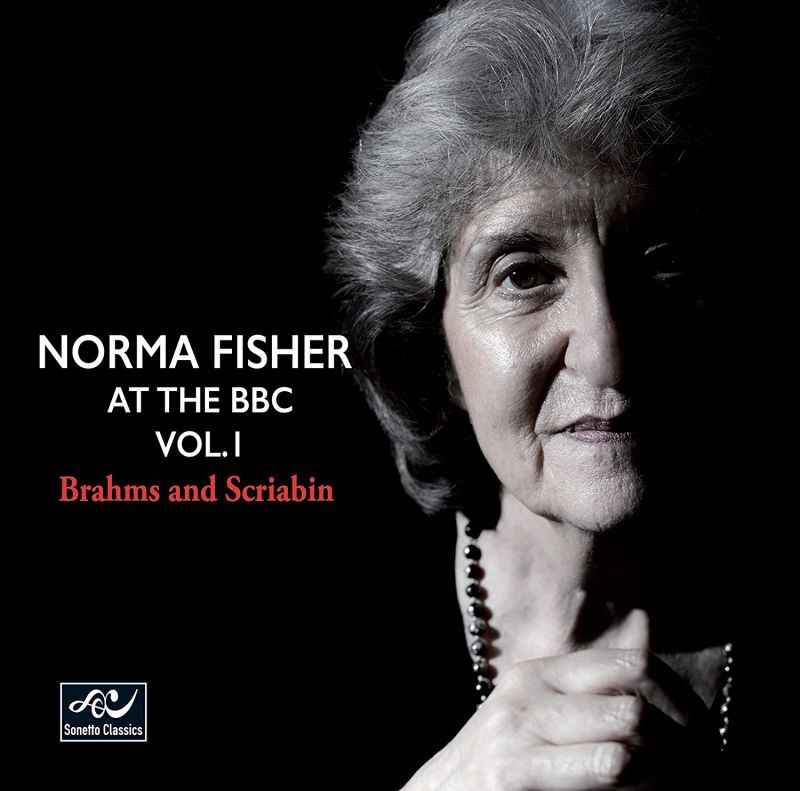 It was during my studies at Kiev Conservatory that I first came across Norma Fisher’s name as an outstanding piano teacher. She was there as a jury member for the Horowitz competition and I expressed to her my obsession with the music of Scriabin. From the interpretation of his First Sonata and a selection of the Op 42 Études on this brilliant disc, I now see precisely why my own teacher recommended me to attend her masterclasses. London-born, of Russian-Polish parents, Fisher won second prize in the Busoni Competition in 1961, then shared the coveted Piano Prize in the 1963 Harriet Cohen International Music Awards with none other than Vladimir Ashkenazy, the year after his victory in Moscow. She appeared at the BBC Proms frequently throughout the 1960s and regularly recorded for BBC Radio, but never commercially. These recordings lie at the basis of the current disc, using mastertape (for Scriabin’s Sonata), reel-to-reel from Fisher’s personal collection (for the Études) and even a cassette recording of the 1979 broadcast (for Brahms), all masterfully and lovingly restored by the Sonetto producer and CEO Tomoyuki Sawado and engineer Andrew J Holdsworth. Although the piano sound is clearly somewhat dated, the only seriously distracting reminder of these less-than-ideal origins is some background crackle in the Op 42 No 4 Étude.

Their status as historical documents apart, Norma Fisher’s interpretations would grace anyone’s collection. A self-confessed Brahms lover, she brings to the two sometimes overlooked sets of variations an intimacy and lyricism that radiate ease, warmth and humanity, void of calculation and over-intellectualism. The Variations on a Hungarian Song, themselves an intriguing mixture of caprice and full-bloodedness, are never harsh or dry, despite her sparing use of pedal.

The Scriabin recordings all date from 1972, when Fisher and others (including David Wilde, Janos Solyom and John Ogdon) were invited to contribute to the BBC’s centenary celebrations. Fisher, who admits to never previously having played her designated pieces, brings out the intricacy, rapture and cosmic surges of the Études, and she does equal justice to architecture and dramaturgy in the Sonata. The Chopinesque funèbre of the finale is in itself something of a masterclass in long lines and spontaneous inflection (though Scriabinists should also note the stunningly Stygian 1977 account by Lazar Berman, only ever available on LP but findable in transfers on the web). This is Scriabin mourning the end of his pianistic career, as he was (wrongly) diagnosed with permanent damage to his right hand. In a cruelly ironic twist, it was trouble with her right hand that shortened Norma Fisher’s own concert career, when in the 1990s she developed focal dystonia, a neurological condition, ‘causing the muscles to seize up without warning’, as she has put it.

Fortunately, having reinvented herself as one of the most sought-after piano teachers in the world, she is now able to enjoy what will surely be a widely acclaimed renaissance for her recorded legacy. Vol 2 is already planned for 2019. But the continuation of such series can depend on luck; Fisher’s recording of Scriabin’s Fifth Sonata, which was planned for release, unfortunately lacks the last few bars, and the producer has issued an appeal for anyone who might be in possession of a recording of the broadcast (info@sonettoclassics.com).

Norma Fisher at the BBC Vol 1

Variations on a Hungarian song

Variations on an original theme