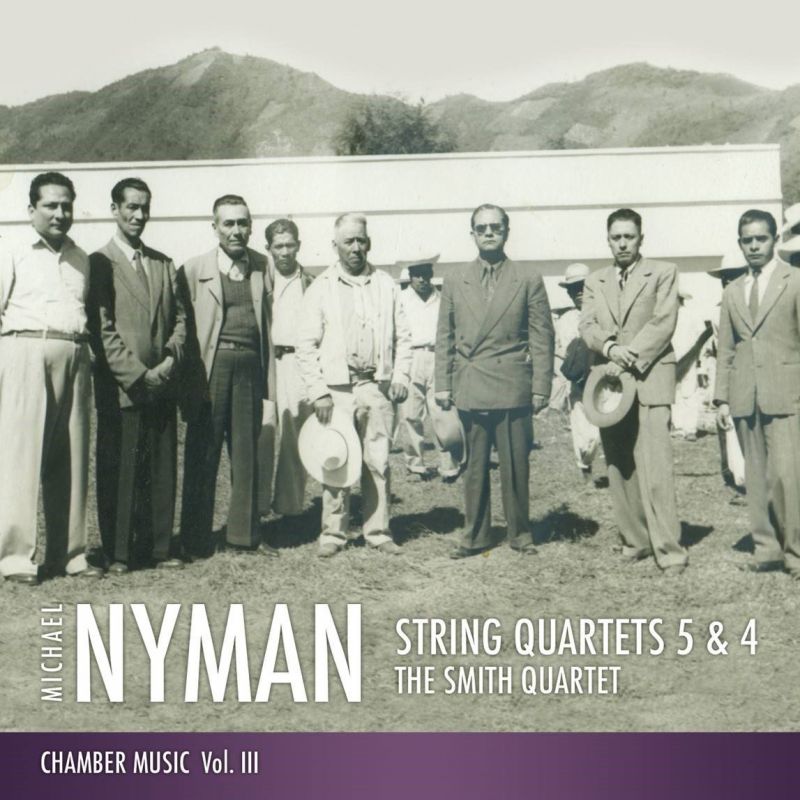 Sixteen years separate Nyman’s String Quartets Nos 4 and 5 – quite a hiatus when you consider that Nos 1 4 were written within the space of 10 years. Maybe Nyman felt that he had covered all areas after completing the ambitious, large-scale String Quartet No 4 (1994 95). Clocking in at over 40 minutes and divided into 12 movements, this significant work in the composer’s oeuvre is a virtuoso tour de force for the quartet in general, especially the first violin. The latter’s part is actually transplanted into the quartet in toto from another work, Yamamoto perpetuo for solo violin, composed some two years previously.

This process of musical appropriation – imagine Bach adding several instrumental lines to one of his solo violin partitas in order to turn it into a concerto – provides the quartet with an almost symphonic breadth and richness. The remaining three string lines sometimes support, reinforce, extend or expand on the first violin’s lines. Elsewhere, such as during the very opening movement, completely new layers are added that are not directly related to the original Yamamoto material, taking the music in a very different direction.

In comparison with the Camilli Quartet’s excellent earlier recording of the Fourth on ‘The Suit and the Photograph’, The Smith Quartet opt for a tighter, more focused sound, resulting in a direct and very dynamic performance overall. A similar approach is adopted for the Fifth Quartet, too, which unlike the previous four does not draw on pre existing material. Plenty of Nyman traits rise to the surface, however. Subtitled Let’s not make a song and dance about this, exuberant dancelike patterns animate the first and fifth movements, while the lyrical, songlike second and fifth hint at the ‘Franklyn’ theme from the composer’s bittersweet soundtrack to Michael Winterbottom’s 1999 film Wonderland.