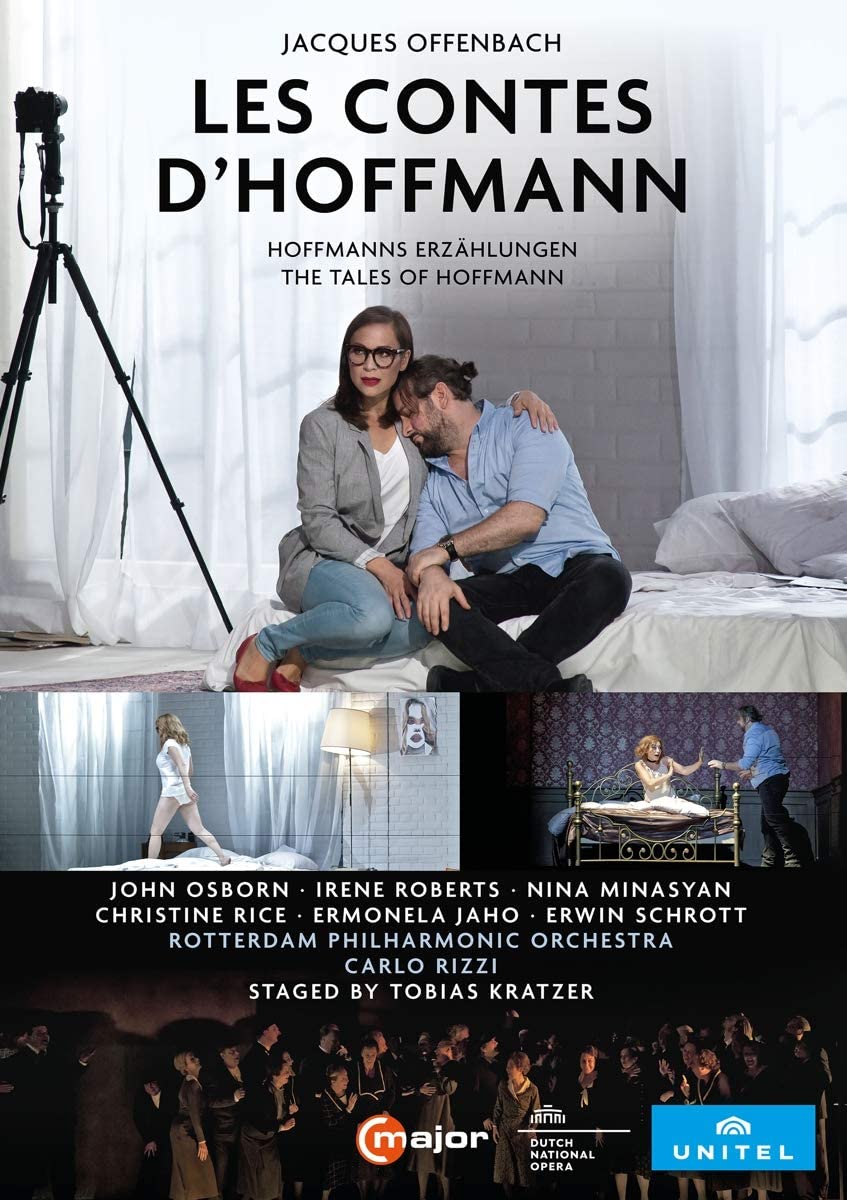 Hoffmann is a contemporary artist with stubble and a man-bun. A photographer, perhaps – screen prints and collages of his latest beloved decorate the white walls of his studio apartment, and his friends swig from bottles of Stella (get it?). So far, so laddish: the one figure in his world who seems better than all this is his unnamed Muse. Here, she’s that romcom favourite, the neglected, bespectacled best friend who’s actually Ms Right: the one who stays behind when the party’s over and watches over him in his drunken slumber, waiting, hoping, constantly loving.

If that was the limit of Tobias Kratzer’s reimagining of Les contes d’Hoffmann, it would be a straightforward if effective one. Recitatives have been pruned and there’s no ‘Scintille, diamant’. But those two key elements – the apartment and the Muse – unlock a huge range of possibilities and fresh dramatic insights. The usual shaky distinction between the Muse and Nicklausse is erased altogether. Played with wonderful subtlety and a warm, clear mezzo by Irene Roberts, she’s the same character throughout, and thanks to Rainer Sellmaier’s spectacular set, she’s onstage throughout too: usually in Hoffmann’s apartment, which is revealed to be the brightly lit centre of a shifting, dimly lit labyrinth of rooms in which Hoffmann’s tales (or fantasies) play out.

It’s one of those ideas that might actually work better on video than in the theatre, and the video director Misjel Vermeiren handles it confidently, creating the illusion of split-screen effects but also focusing in on intimate moments that would surely be lost in a live performance. Giulietta – sung with thoroughly appropriate bravura by Christine Rice – is a sleazy siren at the centre of a ring of heroin users. Antonia’s schoolgirl costume hints at the unhealthiness of Hoffmann’s desire: Ermonela Jaho projects both fragility and an endless, luminous stream of tone that really does suggest a woman whose whole being flows through her voice.

The most troubling, however, is Olympia. No suggestion of music-box charm here; Nina Minasyan is a trafficked, sexualised child-woman, horribly dolled up in a cheap negligee and mechanically straddling Hoffmann as Minasyan peals out her coloratura with all the requisite brilliance but just enough rubato to dispel any hope that she’s not fully aware of what’s happening. The business with the eyes, in this context, is more than usually creepy, and Erwin Schrott is as terrific as Coppélius as he is as Lindorf, Miracle and Dapertutto – conveying a bad-boy allure with a ringing tone. He’s a predatory and very real menace to John Osborn’s blokish Hoffmann, who nonetheless conveys both vulnerability and a romantic ardour that strains, not ineffectively, at the outer limits of his surging, lyrical tenor.

This is emphatically not Hoffmann as an escapist fantasy. If at times it feels distinctly chilly, that’s offset by the commitment of the performances and by the taut, responsive playing of the Rotterdam Philharmonic under Carlo Rizzi (the orchestral colours really glow). It won’t be for everyone; but if you’re willing to engage with an imaginative contemporary Contes d’Hoffmann that doesn’t shy away from the source material’s more disturbing implications, Kratzer rewards you with an emotional pay-off that’s both moving and thoroughly earned.