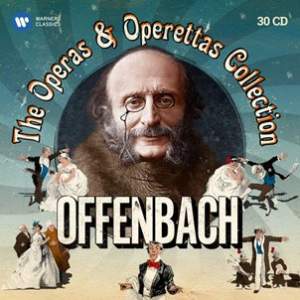 Offenbach’s music is wicked’, said George Bernard Shaw. ‘It is abandoned stuff; every accent is a snap of the fingers in the face of moral responsibility.’ The road to musical perdition, in other words, is paved with 30 brightly packaged discs. Sounds good to me, and almost without exception the performances collected here tread Offenbach’s primrose path with verve. Which is not to say that this is an unalloyed box of delights. This is not a complete edition (far from it) and librettos and synopses are non-existent. Aficionados will already have the best recordings here and novices are unlikely to want this level of duplication, with German-language recordings tossed blithely in alongside classic French versions.

So as well as Orphée aux enfers, La belle Hélène and La vie parisienne, you get Orpheus in der Unterwelt, Die schöne Helena, Pariser Leben … you get the picture. In fact, discounting German versions, highlights discs and fillers (not that I’m ever going to complain about Manuel Rosenthal’s gloriously raffish 1976 Monte Carlo account of Gaîté parisienne) there are only 11 full-length works here. That might or might not bother you: certainly, with a cast that includes Siegfried Jerusalem, Dietrich Fischer-Dieskau and Julia Varady, you’d be justified in giving Heinz Wallberg’s 1979 Munich Hoffmanns Erzählungen a whirl. Andrew Lamb, reviewing it here (6/89), wrote that ‘on its own terms I recommend this version without hesitation’.

I’d second that for the four works conducted by Willy Mattes and Pinchas Steinberg with what looks very like EMI’s 1970s/’80s German operetta repertory company. Names like Anneliese Rothenberger and Nicolai Gedda crop up, delivering reliably lively and listenable performances. You know the sort of thing: no shortage of bounce but a plump, high-gloss orchestral sound and close-miked studio dialogue, closer in spirit to the White Horse Inn than the Café Anglais. Not automatically a bad thing (Pinchas Steinberg clearly adores Die Grossherzogin von Gerolstein); just not, perhaps, the flavour you’re hoping for from an Offenbach collection.

Which is? Well, listen to any of the one-acters, starting with Marcel Couraud’s 1966 recording of Offenbach’s breakthrough hit Ba ta clan, and there it is: lithe textures, springy rhythms, shrilling piccolos and boxy clarinets all bringing that authentic gauloises-and-garlic tang, with a hint of blanc sec tartness and a throwaway Parisian insouciance. Ba ta clan and the two-act Les bavards benefit from the bright, nimble soprano of Huguette Boulangeot, while Pomme d’api, Monsieur Choufleuri and Mesdames de la Halle – given as part of a triple bill at the Opéra-Comique in 1979, but performed here by Rosenthal and his Monte Carlo forces – have that soubrette par excellence Mady Mesplé, as well as the handsome tenor of Charles Burles, every inch the boulevardier.

That style is carried to sublime heights on four undisputed classic recordings: Michel Plasson’s late ’70s/early ’80s accounts of Orphée, Hélène, La Périchole and – my personal favourite, a jewel that sparkles from all angles, in which you can hear the cast relishing each phrase of Offenbach’s score and every syllable of Meilhac and Halévy’s libretto – La vie parisienne. Twenty-first-century operetta lovers will weep to see such luxurious casting: Régine Crespin magnificently sultry as Métella, and Teresa Berganza and José Carreras bringing a suitably Latin tang to the South American setting of La Périchole.

Andrew Lamb pronounced Plasson’s Orphée ‘a sparkling recording, and a joyful achievement’, while noting that Plasson’s decision to record the lengthy 1874 revision means that the familiar Overture is absent. On the other hand, you do have Mesplé as Eurydice and Jane Rhodes – Paris’s reigning Hélène in the 1960s – as Public Opinion. The Belle Hélène here is Jessye Norman, no less: a performance of such sensuality and vocal charisma that it could easily launch a thousand ships. Champagne operetta, grand cru.

The special joy of these recordings is best demonstrated against the one major dud, John Eliot Gardiner’s brisk but chilly Les brigands, and Sylvain Cambreling’s well-intentioned, rather earnest and extremely long Brussels Les contes d’Hoffmann – though here too you have Norman as Giulietta, Rosalind Plowright as a touchingly melancholy Antonia and Jose van Dam’s quick-change act as Hoffmann’s four antagonists. And there’s a lovely souvenir of what we might have had in a collection of airs célèbres from Jane Rhodes: at the very end of her career, and occasionally showing the strain, but elsewhere offering a glimpse of French operetta-singing at its most graceful, luminous and – well, this is Offenbach, so it’s got to be said – sexy. Melodies like these deserve no less. There’s a reason why they called him ‘the Mozart of the Champs-Élysées’.