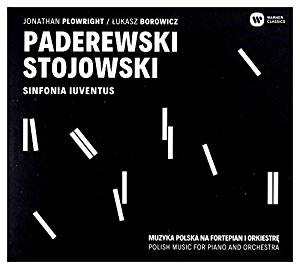 Any new Jonathan Plowright recording is a cause for celebration, even more so when he brings to the catalogue a world premiere. Stojowski’s Symphonic Rhapsody is a worthy addition to his valuable and impressive discography of neglected music by Polish composers, an area he has made very much his own with pioneering performances and recordings of Friedman, Melcer, Paderewski, Zarębski, Żeleński and others – but most particularly, perhaps, of Stojowski. His account of the two piano concertos (Hyperion, 6/02) is one of the all-time great concerto recordings.

The Rhapsody, composed between 1898 and 1900 and dedicated to Harold Bauer, is a freewheeling fantasy (it lasts 15'32") that alternates brooding lyricism (some lovely cor anglais solos) with perky Polish dance rhythms and passages of exhilarating Romantic virtuosity. I doubt you’ll be disappointed. Plowright is one of those pianists who can make even the most banal ideas seem original and rewarding.

Paderewski’s Concerto is among the best of its kind. Begun in 1882 and completed in 1888, it has been recorded several times, most famously by Earl Wild (with the LSO under Arthur Fiedler in 1970) in sound that belies its age. It is an undeniably thrilling reading, fast and furious – and just a little bit hectic: compare his first movement of 15'35" with Piers Lane’s 16'30", Piotr Paleczny’s 16'35" and Felicja Blumental’s 16'19". Plowright is slowest of all at 16'38" but savours the piano-writing with greater depth and detail than anyone, his transition into the eloquent third subject reminding one of a similar passage in the first movement of the Brahms D minor. Plowright shares Wild’s view of the central Romanza (9'20") but again brings more heft to proceedings in the finale without compromising its essential showy character. His partnership with the talented Łukas Borowicz is proving to be most fruitful.

If that were not enough, Plowright rounds off the disc with Paderewski’s ineffably lovely Nocturne in B flat, Op 16 No 4. Should you fail to respond to this, then the chances are that you don’t enjoy listening to the piano.