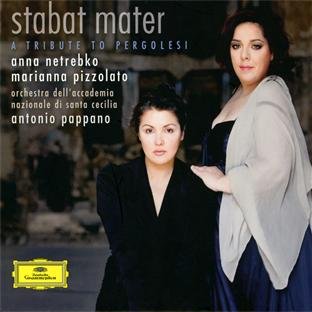 After the Verdi Requiem and the Rossini Stabat mater, Antonio Pappano and his Santa Cecilia Orchestra go back further in time, to the early 18th century. This is a bold move: the conductor and the orchestra are not associated with Baroque music; neither is Anna Netrebko, star of the Kirov Opera and now to be seen everywhere in Mozart and in bel canto. So do these performances hark back to the unstylishly heavy playing on recordings emanating from Italy in the 1950s and ’60s? Emphatically not: led – and, according to Pappano, coached – by Alessandro Moccio, the leader of Philippe Herreweghe’s Orchestre des Champs-Elysées, the orchestra phrases sensitively, letting in plenty of air.

Nel chiuso centro is a cantata on a familiar subject: Orpheus lamenting the death of Eurydice. The opening accompanied recitative, which sets the scene, is followed by two arias separated by another recitative, secco this time. The cheerful imitative ritornello of the first aria soon turns chromatic, a feature developed in the minor-key middle section. Netrebko finds real depth in this deceptively simple music. Questo è il piano is cast differently, two arias enclosing one secco and one accompanied recitative. Here the singer’s woes are caused by unjustified suspicion on the part of his beloved. Supported by the springy rhythmic verve of the strings, Marianna Pizzolato applies her expressive powers so well to yet another shepherd/nymph gripe as to make us actually feel sympathetic.

As last year marked the tercentenary of Pergolesi’s birth, recordings of the Stabat mater – the composer’s most celebrated sacred work – have been coming thick and fast. On Channel Classics (9/10) Elin Manahan Thomas is partnered by countertenor Robin Blaze; on Harmonia Mundi (1/11) the soloists are Anna Prohaska and Bernarda Fink. Both performances are excellent, and either will give much pleasure. But I would urge you to investigate this new one: the singers blend perfectly, and time and again the attention is caught by the quality of the playing. It is a most distinguished issue.