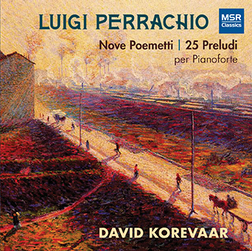 Luigi Perrachio (1883 1966) was born in Turin, where from 1925 he taught piano and later composition at the Conservatorio. As a youth, however, he spent time in Paris, and he returned to his native city as a new music champion. Loath to promote himself, Perrachio’s music mostly languished in obscurity and only a handful of pieces were published in his lifetime. Indeed, none of the piano works on this disc had been recorded before David Korevaar wrapped his enterprising and skilful hands around them, lavishing the utmost in loving care upon each and every piece.

So what is the music like? Think of the gestural atmosphere in Debussy’s Préludes Book 2 as if Scriabin wielded an editorial hand, be it the moody opening ‘Sera’ or the subsequent flickering character piece ‘Zefiro’. ‘La notte dei morti’ isn’t quite as foreboding as its title suggests, although the long lines phrased in subtle washes of pedal evoke a submerged underworld. The ostinato patterns and flourishes of ‘Pioggia’ may superficially recall Debussy’s ‘Jardins sous le pluie’ from Estampes, yet Perrachio’s showers and cloudbursts pursue original and unexpected routes. Similarly, the concluding ‘Mare’ paints aural pictures of ocean waves whose harmonic and rhythmic motion keeps the listener guessing, even foreshadowing John Adams’s 1977 Phrygian Gates for a second or two.

As Korevaar rightly suggests in his superb booklet notes, the 25 Preludes are cut from terser, harder-hitting and more neoclassical cloth. No 3, for example, pits ascending left-hand bass lines against declamatory right-hand dotted rhythms: Mussorgsky’s ‘Bydło’ meets the first movement of Shostakovich’s not-yet-written Fifth Symphony, perhaps? A repeated high-register motif provides the glue to No 5’s airy whimsy, while No 7 is a sombre study in quasi-processional chords that build to a surprising yet inevitably intense climax. No 9’s insistent fifths in the bass and folksy yet thick right-hand chords might sound charming if played softer and lighter, but that’s not what the composer intended (unfortunately!). However, No 10 is an oddly beguiling tarantella-like study featuring murmuring rolled left-hand chords and a rapid, soft, repeated-note melody in the right hand. The pentultimate prelude mixes Respighian modality with full-bodied Schumannesque angularity and is followed by a triple-metre study that impressively showcases Korevaar’s fleet and supple fingers and seemingly concludes in mid-air.

Kudos to David Korevaar for bringing Perrachio’s inventive and pianistically resourceful piano music to light and playing it so wonderfully well. Excellent sound, although loud passages take on a slightly metallic stridency that you never hear from Korevaar in concert.