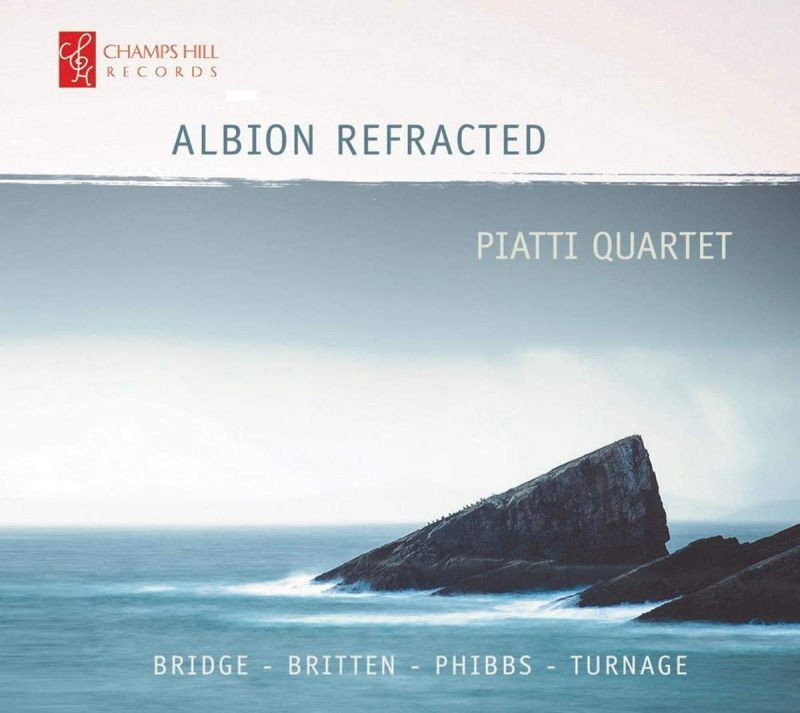 I believe this is the Piatti Quartet’s first full ‘unaccompanied’ release. They collaborated with Gottlieb Wallisch on a disc of Mozart piano concerto arrangements (Linn, 8/13), and were among the various ensembles who contributed to Champs Hill’s survey of Mendelssohn’s complete quartet music (8/14). Here, they offer an illuminating recital of British works, including two recorded premieres.

Both trios of pre-war miniatures by Bridge and Britten are superbly done. The Piatti demonstrate their acute sensitivity to mood and texture right from the first of Bridge’s Idylls. After the deeply melancholy start, with its delicate surges of passion, note the glints of tonal metal in their incisive chords at 2'40", the sensual shudders at 3'17", and their delicate, dewy tremolando at 4'06". They positively bristle in the deconstructed March of Britten’s Divertimenti, strutting as much in quiet music as in the more extroverted sections.

The slow-moving, widely spaced harmonies in the first movement of Joseph Phibbs’s First Quartet (2014) suggest both intimacy and vast expanse. Shadowy figures creep in near the end as the music becomes eerily nocturnal, setting the stage for the solo viola’s plaintive ‘canto’ at the beginning of the second movement. This chant-like melody becomes something of an idée fixe, returning again twice in various guises. Indeed, the work’s five movements flow together, creating coherence and – to my ears – a compelling narrative trajectory. Phibbs’s language is relatively traditional but idiosyncratic, and his score abounds with harmonic and colouristic subtleties. I was particularly charmed by the pizzicato writing at the opening of the third movement, which put me in mind of Malian kora music.

Mark-Anthony Turnage’s Twisted Blues with Twisted Ballad (2008) was written for and premiered by the Belcea Quartet but the Piatti nabbed the recording premiere. Its outer movements were inspired by a pair of Led Zeppelin hits. ‘Dazed and confused’ works quite naturally for the first movement, with its passacaglia-like descending bass line. And I was enormously grateful that Turnage transforms the theme of ‘Stairway to heaven’ so artfully in the third; the song was utterly inescapable in my youth and I normally cringe when I hear it. Here, it’s treated the way Bartók would a folk song, and in fact the Hungarian composer’s influence looms large. But the heart of the piece is the middle movement, a memorial to Fausto Moroni, Hans Werner Henze’s life partner and one of Turnage’s teachers. Bleak and ritualistic, with percussive knocking on the bodies of the instruments, it’s grief-stricken without being self-pitying. As with the other works on the programme, the Piatti play it with absolute authority and conviction. A most enterprising and rewarding programme.