PROKOFIEV Cantata for the 20th Anniversary of the October Revolution 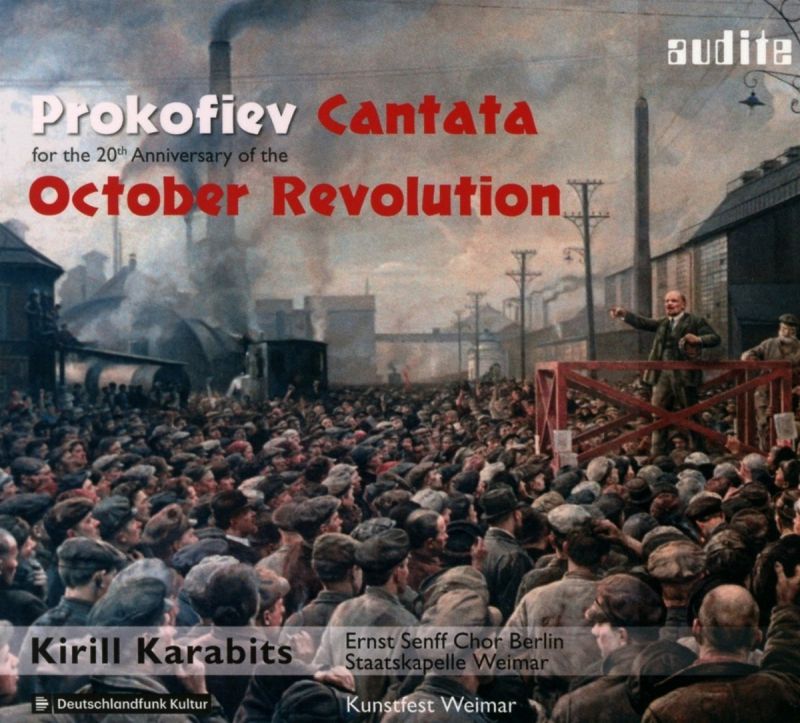 Following Prokofiev’s decision to reinvent himself as a Soviet composer, he wrote much that remains ideologically controversial. Less nakedly propagandist than Zdravitsa (‘Hail to Stalin’), a toast to the dictator on his 60th birthday, the earlier Cantata for the 20th Anniversary of the October Revolution proved too radical for the commissars and was not given in Russia until 1965 (and then only in bowdlerised form). Kirill Kondrashin taped approved highlights for Melodiya (EMI, 8/70) but the rest could not be performed thanks to its inclusion of texts by the now anathematised Stalin. Finally, in 1992, Neeme Järvi set down the whole thing in London, presiding over an unorthodox line-up including accordion players, military band, marching feet and a cameo appearance by Gennady Rozhdestvensky with loudhailer, incarnating the voice of Lenin. At the live event from which the present recording derives, Kirill Karabits himself swivelled round to do the honours, baton in one hand, megaphone in the other. The only complete account with claims to timbral authenticity, Alexander Titov’s from 1997 (St Petersburg Classics CGC006), has enjoyed more limited circulation, although the CD is available online.

Set against the familiar Chandos option, Karabits drives noticeably faster in those movements which include a text. While there are sound musical reasons for the attendant lightening of texture, there may also be a conscious attempt to downplay the ideological content. The results are undeniably exciting if less than seismic, the recorded sound wonderfully clear without threatening to overwhelm domestic speakers. No coupling either; but anyone who enjoys Karabits’s lithe and lucid work with his other, British orchestra will relish this unexpected add-on to his Bournemouth-made Prokofiev symphony cycle (Onyx).

Could this be the new 1812 Overture? Or should we be wary when a score so directly represents a submission to and celebration of unpalatable politics? There’s little evidence of irony in Prokofiev’s October Cantata yet Karabits’s musicians, many of them former East Germans, seem unfazed, plainly relishing Prokofiev’s unlikely mix of 1920s agitprop, cinematic pattern music and long-breathed, ‘socialist-realist’ melody. A modicum of applause is retained and you may even want to join in.

PROKOFIEV Cantata for the 20th Anniversary of the October Revolution

Cantata for the 20th anniversary of the October Re