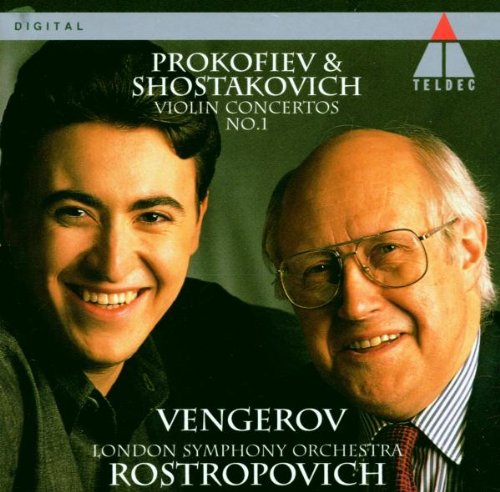 Vengerov uses Heifetz’s bow but it is to David Oistrakh that he is often compared. His vibrato is wider, his manners less consistently refined, and yet the comparison – we can now see – is well-founded. One would guess that Vengerov has been listening to those earlier Oistrakh renditions of the Shostakovich as there is nothing radically novel about his interpretation. It is possible that some will find Vengerov’s impassioned climaxes a shade forced by comparison. Yet he achieves a nobility and poise worlds away from the superficial accomplishment of most modern rivals.

He can fine down his tone to the barest whisper; nor is he afraid to make a scorching, ugly sound. While his sometimes slashing quality of articulation is particularly appropriate to the faster movements, the brooding, silver-grey Nocturne comes off superbly too, though it seems perverse that the engineers mute the low tam-tam strokes. Rostropovich has the lower strings dig into the third movement’s passacaglia theme with his usual enthusiasm. There are some expressive swellings in accompanimental detail. Indeed, the orchestral playing is very nearly beyond reproach.

Vengerov and Rostropovich take an unashamedly epic, wide-open-steppes view of the Prokofiev concerto. Closely observed digital recording (Vengerov sounds sweeter in reality) uncovers a wealth of detail, most of it welcome, with the conductor’s erstwhile clumsy tendency barely noticeable. Towards the end of the first movement, the approach to the reprise of the opening melody on solo flute (pp dolcissimo) with harp, muted strings and lightly running tracery from the soloist is very deliberately taken, and the long-breathed finale builds to a passionate, proto-Soviet climax. The central Scherzo is predictably breathtaking in its virtuosity.

If you’re looking for a recording of the Shostakovich, Vengerov’s coupling may be less logical than a disc of the two together, but no one should be deterred from investigating Gramophone’s 1995 Recording of the Year. Lacking Oistrakh’s authenticity of experience, Vengerov displays similarly boundless technical assurance plus an extra edge of youthful adrenalin and excitement. His Prokofiev is scarcely less fine, the tone gloriously rich, every note hit dead centre. However committed you are to alternative interpretations, these demand to be heard.