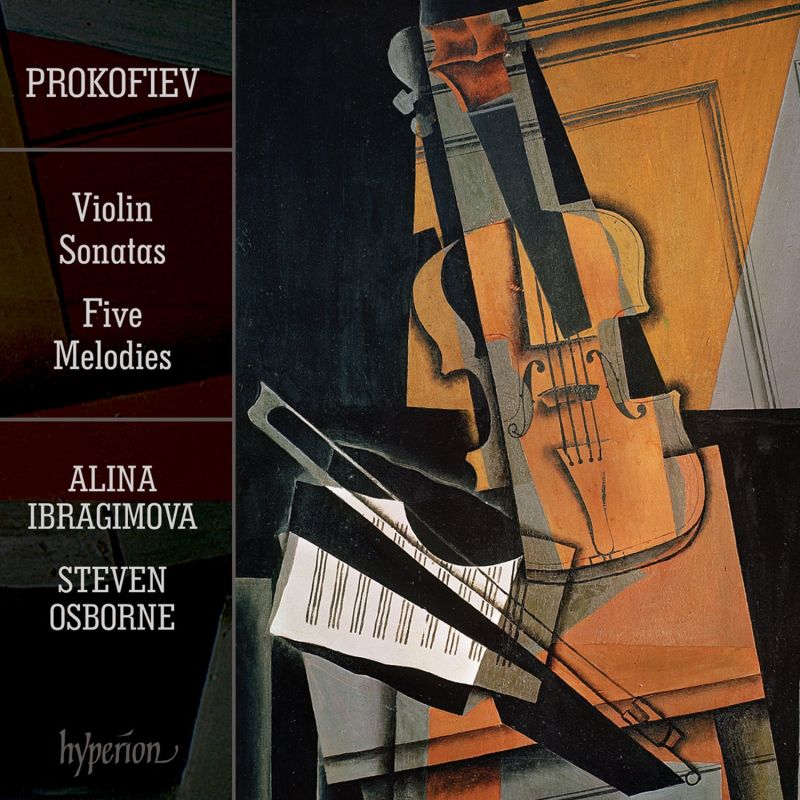 Writing in 1954, David Oistrakh, who was close to Prokofiev during the gestation of both the violin sonatas, made an interesting comment about the performer’s responsibilities in playing his music. ‘It is music,’ he said, ‘in which nothing can be omitted, not a single turn of the melody, not a single modulation. It requires the strictest attention to every detail of expression, a fine, but not over-refined, execution of each individual intonation, as in the case of well-enunciated singing.’ To judge from this absorbing disc of the two sonatas and the Five Melodies, Op 35bis, Alina Ibragimova and Steven Osborne have embraced the very essence of Oistrakh’s remarks. There is a real sense that their responses come from deep within the music’s substance. Just as Oistrakh also advised that ‘the best performance of Prokofiev’s music, or of any other good music for that matter, is one in which the personality of the performer does not obtrude in any way’, so it is the personality and voice of Prokofiev that shine through in Ibragimova and Osborne’s playing, with the traits that lend both sonatas their individuality of expression securely enshrined, defined and projected.

The Second Sonata, the one that Prokofiev reworked from his D major Flute Sonata at Oistrakh’s behest, has generally had the more welcoming reception. However, the First, begun in 1938 but put aside until 1946 and interrupted by work on other major projects including Alexander Nevsky, Cinderella and the opera Semyon Kotko, is by far the more thought-provoking. Why is it so dark, so disturbing, so shot through with anxiety, when the D major Sonata is, by comparison, bathed in sunlight? Whether or not this was an allusion to the dead of the Second World War or to those who had disappeared during the Stalinist purges, the sense of desolation and disquiet is something that comes across powerfully in Ibragimova and Osborne’s performance. From the very start, they prepare the ear for a shrouded atmosphere: Osborne’s deep-toned octaves in the bottom register of the piano establish an enveloping aura of the sepulchral, with Ibragimova’s wisps and gasps of bleached violin timbre adding to the sense of foreboding. Later on in the movement there is a passage that Oistrakh singled out for special mention in his 1954 tribute to Prokofiev. The piano has sequences of ethereal chords in the upper register while the violin is scurrying up and down the fingerboard in gusty shadows. Prokofiev, according to Oistrakh, likened this effect to ‘the wind in a graveyard’, and, Oistrakh added, ‘after remarks of this kind the whole spirit of the sonata assumed a deeper significance for us’. With Ibragimova and Osborne you can appreciate just what Prokofiev meant. Quite why he meant it to be like that we can only surmise; but with Ibragimova and Osborne, this wind in a graveyard sends an apt, icy shiver of apprehension down the spine.

When Oistrakh spoke of ‘a fine, but not over-refined, execution of each individual intonation’ in the performance of Prokofiev’s music, he was not referring to the necessity for correct tuning (though that in itself is an obvious advantage) but to the Russian concept of intonatsiya that is deemed to lie at the heart of the creative process and, by extension, of musical performance. It is a difficult term to define succinctly, as was discovered by the Russian musicologist Boris Asafyev in his classic hundred-plus-page book on the subject in the 1940s, but it underlines the significance of the emotional, expressive values harboured within music’s component elements of rhythm, pitch, interval and so on. It is a concept with which Ibragimova will have grown up and it can be appreciated in her searching approach to Prokofiev’s music here, an approach that Osborne intuits with like minded inflection, colouring and shaping. The bleak atmosphere of the opening Andante assai of the First Sonata is given further definition by the dissonance and drive of the Allegro brusco second movement and by the strange, unearthly weightlessness of the Andante third, at the end of which Ibragimova’s trills hover hauntingly on the edge of audibility.

To be sure, there are moments in the Second Sonata where the luminous lyricism is undermined by more astringent, preoccupied thoughts, and Ibragimova and Osborne are fully aware of their interpretative roles when that is the case, but they also find the seam of sanguine spirit that courses through the music. Different again are the Five Melodies that Prokofiev arranged for violin and piano from the wordless songs he wrote in 1920 for the Ukrainian-born soprano Nina Koshetz, who was soon to create the role of Fata Morgana in the Chicago premiere of The Love for Three Oranges. She also had a close association with Rachmaninov, who dedicated his Op 38 songs to her in 1916, and there was something about her vocal quality and personality that inspired both composers to write music of a particular hue. In the case of Prokofiev there are, on occasion, traits that were to imbue his later music; but there is also a dream-like, sometimes passionate, sometimes rarefied impulse that Ibragimova and Osborne convey with exactly the penetrating insight that is manifest throughout this remarkable disc.