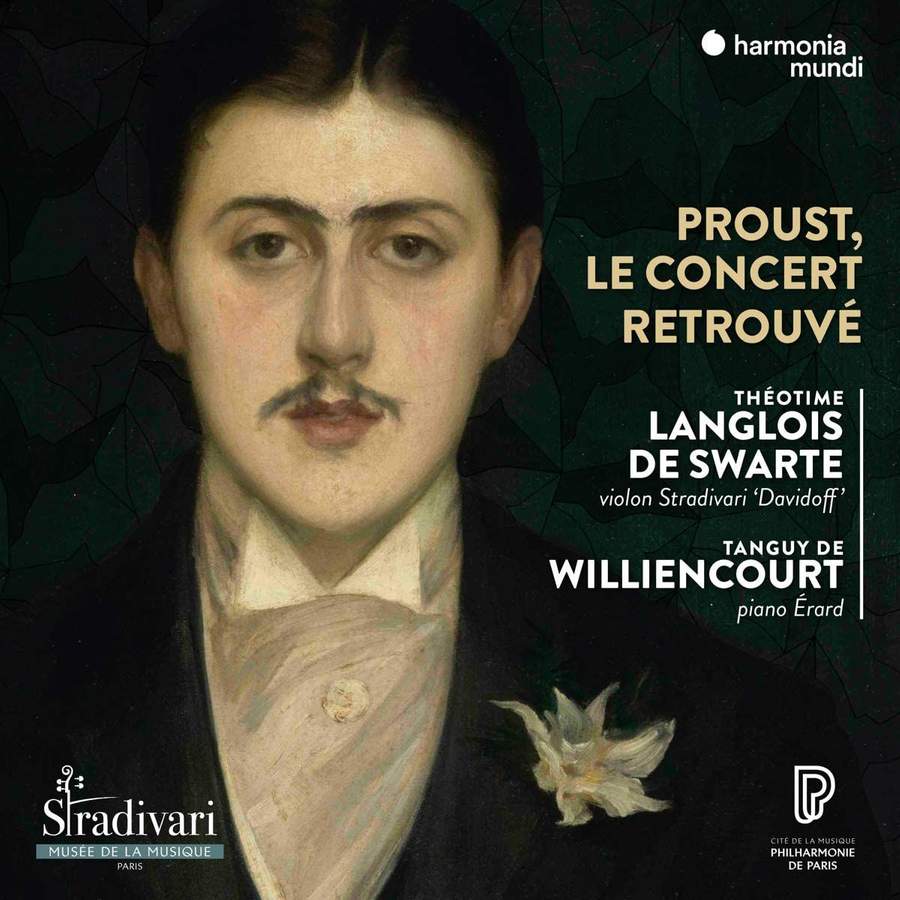 On July 1, 1907, Marcel Proust hosted a private concert at the Ritz in Paris in honour of Gaston Calmette, editor of Le Figaro, who had agreed to accept for publication ‘my long pieces of writing little favoured by the public’, as Proust put it. Intended for Fauré as pianist (Proust admitted to being ‘smitten’ with his music), and whose A major Violin Sonata was to be the main work, the evening did not quite go according to plan. Fauré, exhausted by Conservatoire commitments, withdrew a few days beforehand, proposing his mistress, Marguerite Hasselmans, in his place for the Sonata, alongside the violinist Maurice Hayot. Proust, meanwhile, drafted in his friend the pianist Édouard Risler to take over the rest of the programme, though it would seem that Risler, to Proust’s chagrin, did not include music by Reynaldo Hahn, the writer’s close friend and former lover.

To mark the 150th anniversary of Proust’s birth later this year, Tanguy de Williencourt and Théotime Langlois de Swarte have now reconstructed that evening from 1907, though their programme doesn’t quite replicate what we know was played. In addition to the Wagner/Liszt Liebestod, Risler included a transcription of the Meistersinger Overture, omitted here. Proust’s correspondence with Hahn mentions a Chopin Prelude but doesn’t tell us which: de Williencourt opts for No 15 in D flat, the ‘Raindrop’, its shifts in mood seeming extraordinarily apt in the context of the recital as a whole. And in rectification of Risler’s omission and acknowledgement of Proust’s relationship with Hahn, the programme is flanked by transcriptions of two of the latter’s songs: ‘À Chloris’ forms an effective declaration of love at the start; and ‘L’heure exquise’ becomes a symbolic envoi at the close, its title summing up, perhaps, much of what we have heard in the intervening time.

The album functions on two levels. First, it’s an outstanding recital in its own right. Both musicians play instruments from the Musée de la Musique in Paris. Langlois de Swarte uses a recently restored 1708 Strad, with a dark, appealing, at times almost bittersweet tone. De Williencourt plays an 1891 Érard, an extraordinarily beautiful instrument, gloriously clear and even throughout its range. Their performances balance emotion with technical finesse throughout.

The Fauré Sonata is all troubled elegance and understated passion, the anxious outpouring of the opening movement held in check by the refinement of the playing, the Scherzo suggesting brittle, uneasy humour beneath the surface brilliance, and the ambiguities of the finale beautifully revealed and explored. Its tensions are released into the gentle lyricism of Fauré’s Berceuse, which follows on immediately as an effective epilogue. The song transcriptions, meanwhile, are exquisite and tender: ‘À Chloris’, in particular, is ravishing, opening up a whole world of desire and affection, even without its text. We’re conscious of a wonderful partnership here, characterised by an instinctive sense of give and take between both players, with each knowing when to assert himself and when to draw back and give the other precedence.

Well over a third of the programme, though, consists of works for solo piano, bringing de Williencourt centre stage, and reinforcing the impression – made by his contribution to Harmonia Mundi’s disc of Debussy’s late works (11/18) – of his being a truly outstanding pianist. He gives us graceful, teasing Couperin and immaculately judged, deeply felt performances of both Schumann’s ‘Des Abends’ and the ‘Raindrop’ Prelude, the latter opening wistfully but turning dark, incisive, even menacing as it gradually gathers weight. The Liebestod, meanwhile, placed just before the close, is marvellously done, at once exactingly precise, ecstatic and thrillingly sexual.

What makes the album so incredibly moving, though, is the way it takes us into Proust’s mind. The infinite subtleties of his fiction, teasing out complex gradations of feeling and sensibility, find their counterparts in sound here. Listening to it complete and in the correct running order, you realise that Proust’s programme, almost imperceptibly darkening in mood as it goes, both suggests in embryo the emotional trajectory of À la recherche du temps perdu and lays bare the remarkable musical imagination that informs it. The almost daunting near-juxtaposition of Couperin with Wagner is indicative of his tremendous breadth of reference. And his understanding of the closeness in temperament between Schumann and Fauré is little short of astounding. Proust describes the Fauré Sonata in Sodome et Gomorrhe as ‘inquiet, tourmenté, schumannesque’, which is precisely what it is, and precisely how it sounds here, in close proximity to ‘Des Abends’. It’s a breathtaking, astonishing disc, and I cannot recommend it too highly.