A fantastical night at the theatre 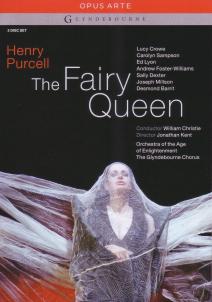 The Fairy Queen is often referred to snootily as a “semi-opera” because the entertainment staged at Dorset Garden in 1692 was a mix of Purcell’s musical numbers and a bowdlerised adaptation of Shakespeare’s A Midsummer Night’s Dream. In fact Purcell’s audience regarded the mix of spoken drama and musical fantasy more simply as “dramatick opera”, and thought nothing odd about rehashing Shakespeare. The subtlety and richness of Shakespeare’s original text was diluted for the occasion in 1692 but that does not mean that the result is not stage-worthy in its own right. Unfortunately, most staged productions of The Fairy Queen have avoided putting Purcell’s music back into its proper quasi-Shakespearean dramatic context. While nobody in their right mind would think it preferable to stage The Magic Flute without any dialogue, ENO’s 1995 production of The Fairy Queen worked hard and unevenly to make Purcell’s music stand alone in isolation from the relevant moments in A Midsummer Night’s Dream. Simply using the charm and quality of the music as a springboard for contrived stage action tells less than half the story.

The idea of reconciling the score of The Fairy Queen and its original play has for too long seemed too much like hard work for those who could not be bothered to make a serious attempt. So kudos to director Jonathan Kent and the entire production team of Glyndebourne’s fabulous 2009 reincarnation of the music and play reunited.

The reward of such courage and inquisitiveness is lovely to watch. William Christie’s direction has its cons as well as its pros; some songs (“If love’s a sweet passion”) are affected by bulgy exaggerations, tiny unnecessary tricks are employed by the OAE and chorus, and the copious use of battering percussion is irritating to those who prefer organic fare to artificial additives.

However, the production is a treat to watch: Kent has imaginatively realised the connections between the masques and the spoken drama, mixing coherently the three worlds of late-17th-century aristocratic England (Thebes), the modern day (the mechanicals preparing Pyramus and Thisbe), and the Fairy kingdom at night. The stage action is packed with good humour, affection and excellent use of colours and contrasts (although you might want to cover your childrens’ eyes at the rather saucy choreography for giant pink rabbits at the end of Act 3). The masque of the four seasons in Act 4 is a veritable feast on the eye. Much of the credit for the charm of this production must go to the actors, especially the four confused lost lovers, the quarrelling Oberon and Titania, and, of course, Desmond Barrit’s Welsh Bottom. Of the principal singers, Lucy Crowe has stage magnetism and a terrific voice, but “Hark! the echoing air” suggests that her steely timbre is slightly less at home in 17th-century music than in Handel. Ed Lyon has the lion’s share of tenor solos; he makes heavy weather of some things but his higher-lying passages are excellent. Andrew Foster-Williams sings with gusto and appears comfortable as an extraordinary variety of characters. Carolyn Sampson steals the show in the Plaint, as the mood instantly switches from prior jollity to intense pathos; she sings “I shall never see him more” with devastating pathos but also impeccable style (plaudits also to Alison Bury’s tender violin obbligato). There are a few CD versions that I’d rather listen to for the music alone, but this DVD conveys an exceptionally spectacular event in the theatre. For a visual and dramatic feast, this reunification of play and music for The Fairy Queen is an absolute triumph.