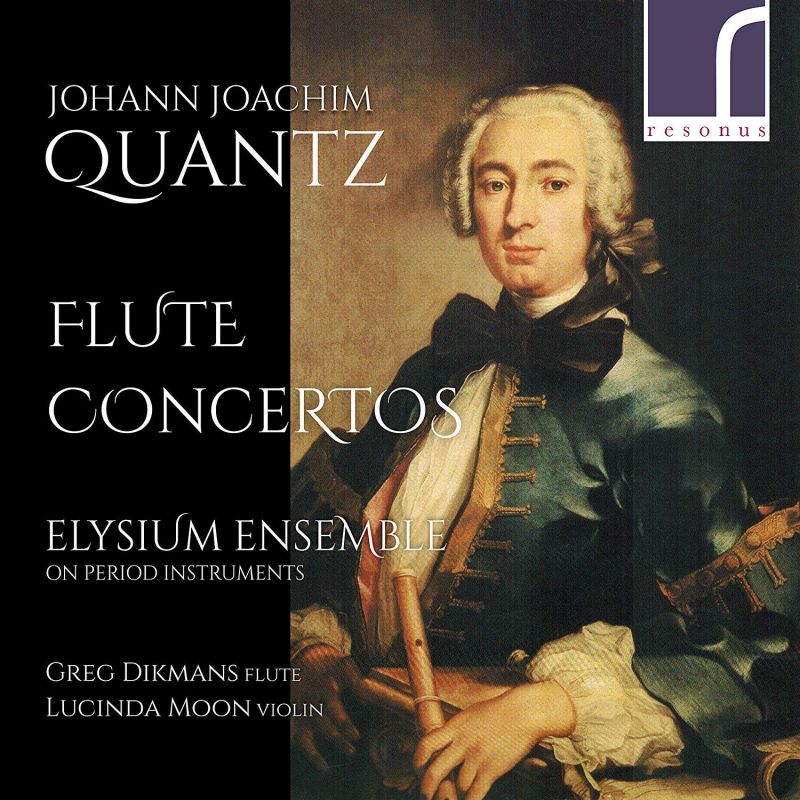 Johann Joachim Quantz cuts an intriguing figure on the contemporary visibility front. On the one hand, he was renowned in his time as one of Europe’s finest flute players, working in Dresden, then famously at the Berlin and Potsdam courts of flute-playing King Frederick the Great; and equally he was renowned as the author of the influential 1752 treatise Essay of a Method for Playing the Transverse Flute. On the other hand, while he composed a whopping body of flute music – over 300 concertos, around 230 sonatas, plus various trio sonatas, duets and solos (and for some context, Vivaldi composed around 230 solo concertos for his own instrument, the violin) – all this music was largely unavailable to the public at large: Frederick took entire possession not only of all Quantz’s Potsdam and Berlin music but of all his Dresden concertos as well.

Now we have the luxury of applying the treatise’s ideals to the actual music, though, and that’s precisely what Greg Dikmans and the Elysium Ensemble have made a point of doing with these three concertos for flute, strings and continuo (plus the major-key Cantabile from the E minor Concerto, QV5:116): ideals which on paper boil down to the galant desire for naturalness and restraint (eg sentiment taking precedent over galloping speed when it comes to tempos), and every note’s function painstakingly thought through.

They have genuinely hit those nails squarely on the head, too. Tempo-wise alone, compare the leisurely flow of their A minor Concerto, QV5:236, with the pace of the Les Buffardins version (Accent), which comes in at 6'25" as opposed to the Elysium’s 7'46". Or indeed the brightly urgent chuggings to be heard across Concerto Armonico and Miklós Spányi’s Quantz concertos programme (Naxos). In fact tone is another thing worth mentioning, because it’s a notably soft-focus one, which reminds me of night music in the best possible way.

Speed or bright zinging tone aren’t necessary for keeping things interesting either. Take the way in the F major Concerto, QV5:162, subtle tension is spun through carefully measured emphasis and silence, and all with a hugely sensitive chamber awareness between ensemble and soloist; listen out too for cellist Josephine Vains’s attentive duetting with Dikmans.

It’s true that there’s not a lot of recorded competition when it comes to this repertoire, but even if there were I’d wager this would still sit near the top.