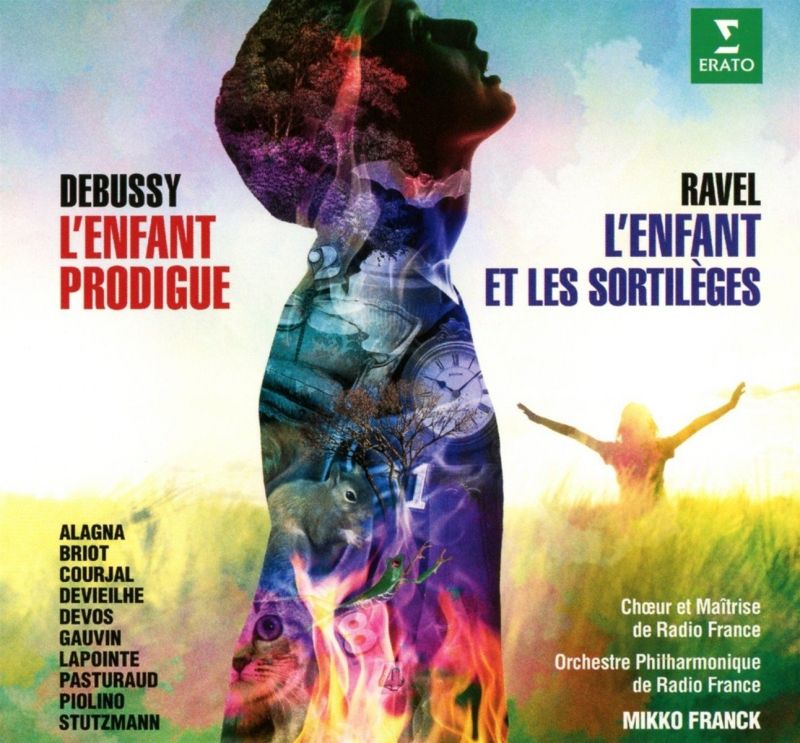 Not just one but two naughty boys here. Rather than pair Ravel’s L’enfant et les sortilèges with L’heure espagnole, Warner matches it to another errant (if much older) child, Debussy’s L’enfant prodigue (‘The Prodigal Son’), the cantata with which he won the Prix de Rome in 1884. Both works were recorded in concert in Paris’s warm, wonderful Maison de la Radio last April.

There have been plenty of Ravel L’enfant recordings of late. I’m not convinced that Mikko Franck is as natural a Ravel conductor as Seiji Ozawa or Leonard Slatkin – the orchestral magic doesn’t always flow from the Orchestre Philharmonique de Radio France. Slatkin’s foxtrot, for example, has plenty of chic, whereas Franck is a bit flat-footed. However, the casting is very strong, with bags of character, from Nathalie Stutzmann’s molasses contralto as Maman – and a heavily lacquered Chinese cup – to François Piolino’s demented Arithmétique and feisty teapot (‘I’ll marm’lade you!’). Chloé Briot kicks up a storm as the Child, while Nicolas Courjal and Julie Pasturaud repeat their witty armchair and sofa double act from the Naxos Lyon recording. Best of all is Sabine Devieilhe’s terrific coloratura as Fire – faster and yet more incisive than any incendiary competition (a blustery Annick Massis for Slatkin and an overtaxed Anna Christy for Ozawa). Devieilhe is also a peachy storybook princess and a stratospheric Nightingale in the second scene.

From the opening sunrise of L’enfant prodigue, it’s obvious this isn’t typical Debussy. There’s a lot of Massenet in the score based on the biblical parable – just listen to the whimsy of the harvest procession. Was the young composer writing what he thought the Prix de Rome judges wanted to hear?

Franck’s cast is even more luxurious than for the Ravel. Karina Gauvin, as Lia the mother, reins in her powerful soprano for a moving opening air, while Roberto Alagna’s open-hearted, sunny tenor and excellent diction make for the best Azaël now on disc. Jean-François Lapointe’s Siméon (the father) doesn’t have much to do but is reassuringly sturdy. All three sound far more idiomatic than the Orfeo cast under Gary Bertini. Keener competition though comes from Glossa under Hervé Niquet, where Guylaine Girard’s lighter soprano is marginally preferable to Gauvin as Lia. Niquet conducts the score with more joy as well.

The disc concludes with Colin Matthews’s charming orchestration of the finale of Debussy’s Symphony in B minor, a curiosity composed for piano duet by the 18-year old composer in 1880.