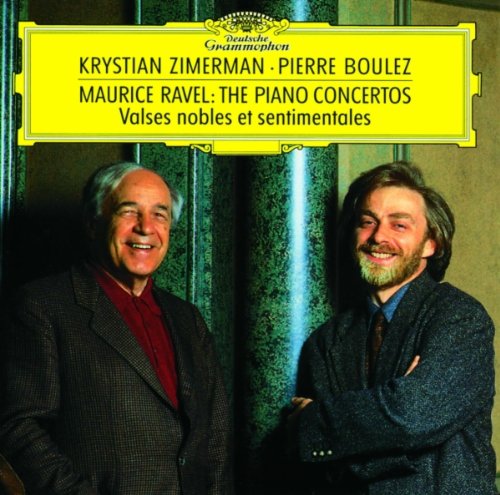 Expectations: exceptional clarity, consummate rhythmic control, spacious phrasing, bright recorded sound, fire from the soloist, ice from the conductor. Reality: all of those things, plus the authentic Ravelian tang of colours perfectly mixed, harmonies perfectly weighted and lines perfectly balanced.
Zimerman’s pianism is self-recommending. His trills in the first movement of the G major Concerto are to die for, his passagework in the finale crystal-clear, never hectic, always stylish. For their part Boulez and the Clevelanders are immaculate and responsive; they relish Ravel’s neon-lit artificiality and moments of deliberate gaudiness. That goes equally for the Valses nobles, which have just about every nuance I would want to be there, and none that I wouldn’t. The recording is generous with ambience, to the point where some orchestral entries after big climaxes are blurred. Otherwise detail is razor-sharp and one of the biggest selling-points of the disc.
Zimerman’s humming may be a slight distraction for some listeners; I worried about it only because I felt that it was a symptom of an emotional intensity not always to the music’s best advantage. That bothered me mainly in the Left-Hand Concerto, where I also wasn’t convinced that the LSO knew quite what they were supposed to do with the long notes of their main theme, and where I sensed a slight lack of tension in exchanges between piano and orchestra. There again, had the G major Concerto not been so wonderful those points might not have registered at all, for this certainly is playing of no mean distinction.
In the G major Concerto I’ll still turn happily to Argerich for mischief and abandon, and to Michelangeli for breathtaking eloquence in the slow movement. For the Left-Hand Concerto I admire the suavity and ravishing textures of Louis Lortie (I share hardly any of Christopher Headington’s reservations in his review). Zimerman’s phenomenal pianism sets its own agenda and brings its own rich rewards; he has a place of honour in that exalted company.'

Concerto for Piano (Left-Hand) and Orchestra