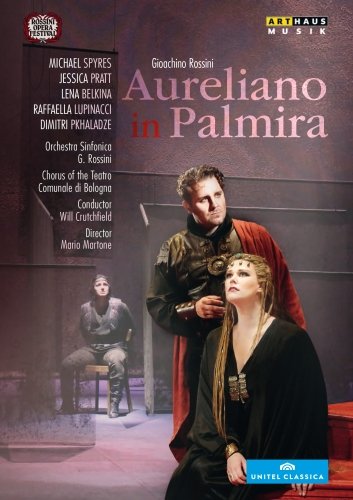 ‘Who will save Palmyra?’ the maidens cry in Rossini’s Aureliano in Palmira. Two hundred years after the opera’s 1813 prima the cry still goes up: the ‘Queen of the Desert’ remains at the centre of Islamic State’s cultural vandalism. The Emperor Aurelian’s mission in 272AD was not pillage but the securing of imperial boundaries against Queen Zenobia, who had been waging guerrilla wars in Syria, Egypt and Asia Minor. Since this is one of only three Rossini operas for which no manuscript survives, Pesaro has come late to Aureliano and its cargo of musical riches. The critical edition for this Pesaro prima is by Will Crutchfield, who also conducts the performance with authority and style. As with Pesaro’s 2013 Guillaume Tell, a full text is played, including music that was cut before or immediately after the premiere. At 200 minutes, it is some 30 minutes longer than that on Opera Rara’s fine studio recording (12/12). Yet there are few if any longueurs. Filmed live in Pesaro’s exquisite Teatro Rossini, the staging by film director Mario Martone is simple without being static, pointful without being concept-bound. The Rembrandt-like gloom of Sergio Tramonte’s sets takes some getting used to. Even Act 2 – ‘A pleasant hill by the Euphrates’ – is dark, yet plausibly so. This is dark music in the midst of which passion flares. Unusually for the young Rossini, Aureliano carries a strong erotic charge. He and his librettist, Felice Romani, added an important character to the historical narrative: Zenobia’s lover Arsace, a former ally of Rome who is captured during the conflict. Rossini wrote the role for the great castrato Velluti, whose vocal variants (many of them deployed here) give the music a proto-Romantic feel. Pesaro’s Arsace is the Ukrainian mezzo Lena Belkina, as handsome a young warrior as any Zenobia might wish for and a superb singer-performer to boot. Jessica Pratt is a vocally brilliant Zenobia, full-voiced even on the highest E flat. If there is a touch of clutch-and-stagger about her acting in Act 1, all that changes in Act 2 as both the opera and the staging drive ever deeper. Michael Spyres’s Aureliano withstands nobly the vocal challenges of a part which Rossini wrote for two different voices after the illness in mid-composition of the coloratura tenor Giovanni David. Raffaella Lupinacci looks and sounds well in the cameo role of Publia, a young woman who is also in love with Arsace. This is important since it is Publia who inspires Aureliano’s unexpected act of clemency. There is much to be said for Martone’s on-screen after-history during the concluding vaudeville, though the quotation from Edward Said – ‘Europe is powerful and articulate; Asia is defeated and distant’ – seems ill-judged. The orchestral playing marries trenchancy with eloquence, some dodgy horn contributions notwithstanding. Having the fortepiano onstage throughout seems odd, there being pleasingly little secco recitative in Aureliano. But that is a minor quibble. Irrespective of the medium, this is the Aureliano to have.