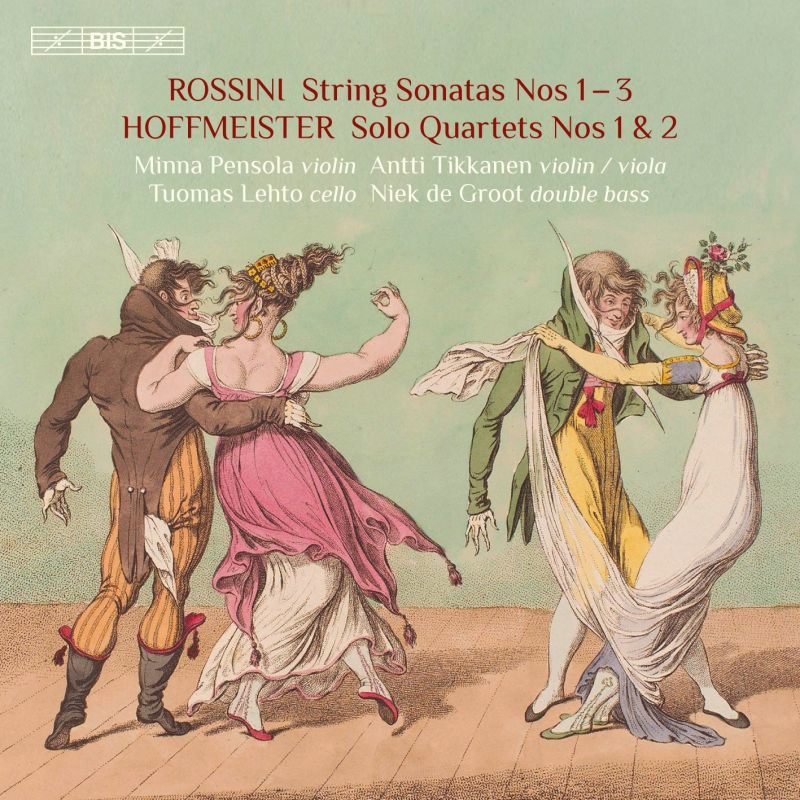 Hoffmeister and Rossini appear, on the face of it, to be an odd couple indeed. Certainly I can locate no other disc that pairs their music; perhaps the only time the two might otherwise appear together would be if you like fizzy beer with your steak. Nevertheless, they both composed sets of string quartets with double bass and so find themselves rubbing shoulders here.

Rossini needs no introduction but Franz Anton Hoffmeister (1754-1812) might be best known for lending his name to a quartet by Mozart that he published in 1786. He was a prolific composer himself, active in opera and symphonic forms as well as writing an avalanche of chamber music. He was also a double bass player and accordingly his ‘Solo Quartets’ are led, as it were, from the bottom, with violin, viola and cello accompaniment. The Dutch bassist Niek de Groot is heroic in his starring role, as virtuoso as you like and characterising admirably across a spectrum from melodic to gruff and serious to witty.

De Groot retreats to his more usual job of providing bass underpinning for his three Finnish colleagues (Antti Tikkanen swaps his viola for second violin) in three of the String Sonatas composed by the 12-year-old Rossini. Not yet the operatic master – that would take a few more years – his unassuming chamber works nevertheless show the lightness and humour that would be evident in much of his maturer music, as well as a distinct gift for melody (the wonky opening motif of No 1 in G, for example). There’s also something more earnest and dramatic in No 2 in A, perhaps the best of these works.

They are all captured in focused but airy sound, giving a good sense of the Schauman Hall in Jakobstad (Pietarsaari), Finland, some 450km north of Helsinki. Expect no revelations from these pieces. They are, nonetheless, entertaining, effortlessly enjoyable and beautifully performed.