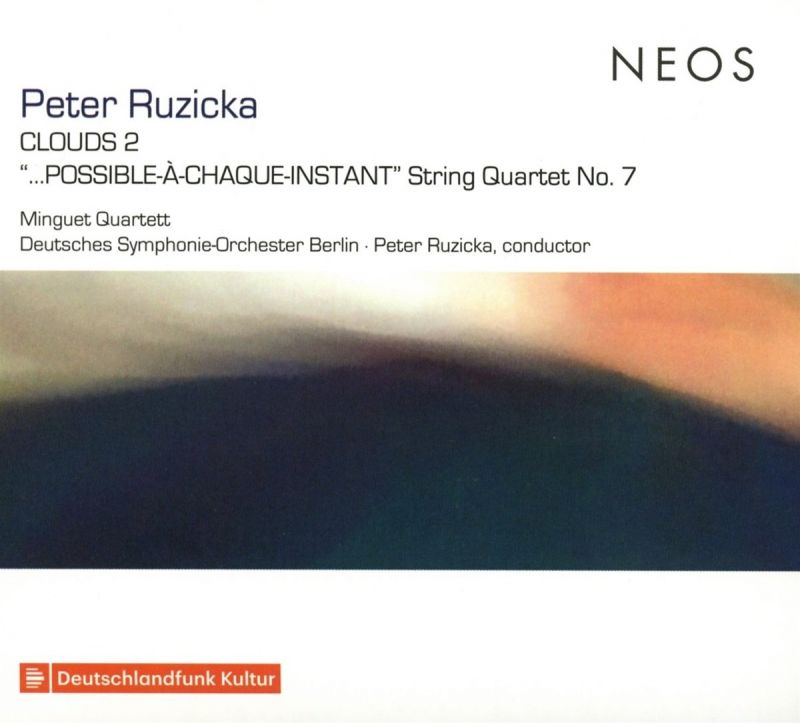 Composer, conductor and administrator, Peter Ruzicka is certainly among the most versatile of present-day musicians and this latest release updates the story with regard to his music for string quartet (the initial six quartets and sundry pieces having already appeared on a two disc set – NEOS10822/3).

Extended from an earlier work, Clouds 2 (2013) takes its cue from ‘Der ferne Klang’ – not in terms of Schreker’s opera but of that ‘distant sound’, whose imagining runs through German late Romanticism and early modernism. Quartet and orchestra interact not as a concerto grosso but rather a process of growing confrontation prior to the transfigured yet unresolved close.

The Seventh Quartet (2016) investigates an evolution determined not by an ultimate goal but by what is ‘possible at any moment’ (hence the subtitle). Beethoven’s C sharp minor Quartet, Op 131, is a precedent, even if the eight sections of the present piece are not definable movements but episodes conveying motifs and ideas (by Ruzicka and others) in an open-ended concept that seems intent on offering up fresh possibilities right through to the tensely resigned ending.

Superb playing from the Minguet Quartet and, in the earlier work, the Deutsches SO. Anyone new to Ruzicka might head to one of the orchestral discs (NEOS11101 with Mahler/Bild and Trans is a good starting point), while those who have the earlier quartets should acquire this.