RZEWSKI The People United Will Never Be Defeated 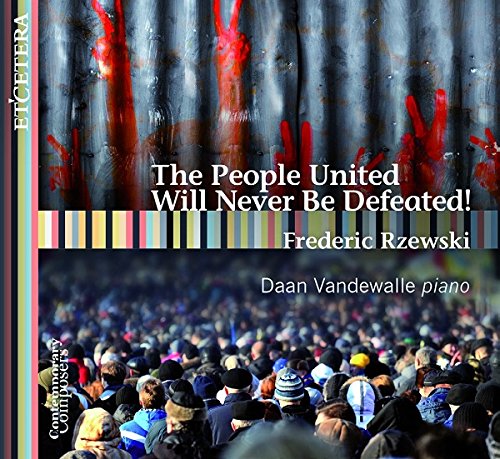 In addition to Daan Vandewalle’s impressive credits as a new-music pianist, he has a natural inclination towards big projects such as performing Alvin Curran’s complete Inner Cities piano cycle in one concert, or tackling Sorabji’s four and a half-hour-plus Opus clavicembalisticum. So it comes as no surprise that Frederic Rzewski’s monumental variation set based on Sergio Ortega’s resistance song ‘The People United Will Never Be Defeated!’ provides a fitting showcase for Vandewalle’s gifts.

He gets off to a tentative start in the opening theme, at a tempo slower and less rock steady than in Rzewski’s 1986 HatArt recording. If his lilting and yielding rubato in Variation 1 sounds slightly arch, closer scrutiny reveals the pianist going out of his way to project Rzewski’s myriad phrase groupings and articulations, while providing a contrasting point of reference to Var 2’s resolute firmness. Similarly, a more expansive and lyrical Var 3 than usual offsets Var 4’s forward drive. As the performance progresses, it becomes increasingly apparent that Vandewalle is striving to give each variation its own character and point of view.

While Oppens’s Cedille remake remains the sonic and interpretative version of reference, Vandewalle broaches Rzewski’s aesthetic with a strong personality and often sheds fresh light on various aspects of this vast score, whether or not one agrees with all his ideas. As such, this recording warrants attention in an increasingly crowded and competitive field.

RZEWSKI The People United Will Never Be Defeated

(The) People United Will Never Be Defeated!

Rzewski The People will never be defeated

RZEWSKI The People United Will Never Be Defeated!