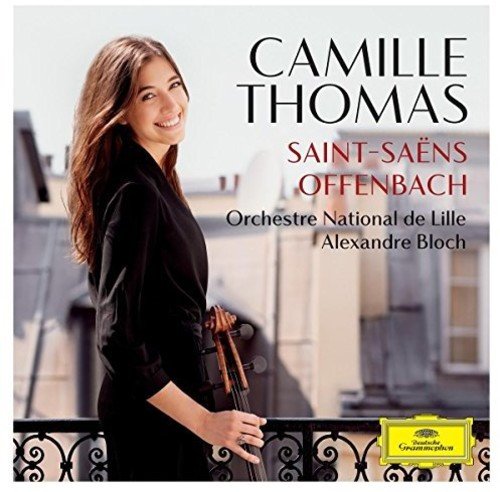 Those familiar with Saint-Saëns’s First Cello Concerto will know that there is no orchestral introduction. The soloist enters on the second beat of the very first bar. So the listener has no time, as in traditional concerto form, to adjust to the tempo, orchestral sound and balance, or absorb any thematic or motific exposition before the soloist comes in. Saint-Saëns gives you a headlong assault. My first reaction was that Camille Thomas, a new name to me, has all the requisite technique and produces a sound I can only liken to drinking hot chocolate: delicious, warming, full of flavour. You know at once you are in safe hands. Hers is a version of this much-recorded concerto I like very much indeed, not least for her subtle and judicious use of portamento throughout.

But there’s more. The photogenic Franco-Belgian cellist further underlines her romantic credentials – if I can put it like that – with an unexpectedly moving performance of a transcription of ‘Mon coeur s’ouvre à ta voix’ from Samson et Dalila. An equally winning account of the Op 16b Suite follows, in the same vein as the excellent Gabriel Schwabe (Naxos, 1/18).

While Schwabe pursues Saint-Saëns’s other works for cello and orchestra, Thomas opts for Offenbach (himself a virtuoso cellist in his youth) and another vocal transcription, joining forces with the charismatic Serbian violinist Nemanja Radulovic´ for an arrangement of the Barcarolle from Les contes d’Hoffmann. (‘Song’, writes Thomas, ‘has always played a big part in my own artistic approach.’) It’s charming enough, but more important is what comes next, the only recording I have found of Offenbach’s Introduction, prière et boléro, published in 1840. I think you’ll find other cellists will be queuing to record this, a tuneful and showy 12-minute addition to the catalogue.

Whether or not it was a wise decision to conclude her DG debut by allowing Rolando Villazón to thoroughly upstage her in ‘Je suis brésilien’ from La vie parisienne is a moot point. Be that as it may, I hope Camille Thomas’s next recording might be Offenbach’s Concerto militaire, for she is so thoroughly in tune with his world. Whatever her choice, I look forward to hearing it.