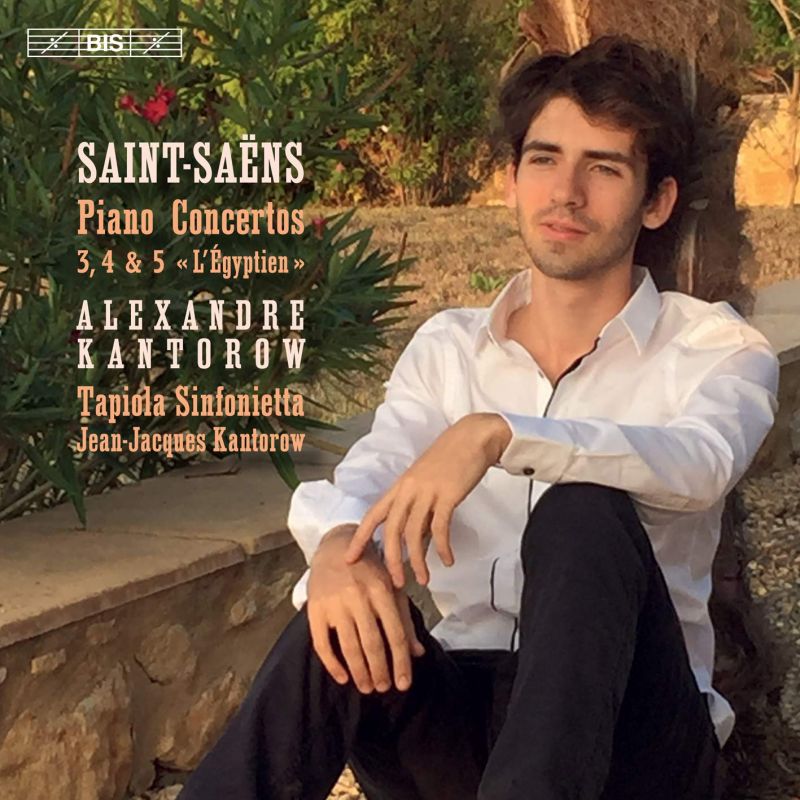 It is no hardship to review yet another Saint-Saëns piano concerto recording when it is as good as this, and one which, moreover, has managed to accommodate these three on a single disc lasting a generous 80'37", a first for these particular works, so far as I know.

The soloist is the young (b1997) son of the distinguished violinist-conductor and, believe me, he is the real deal – a fire-breathing virtuoso with a poetic charm and innate stylistic mastery, as anyone will confirm who has heard his Liszt concertos (A/15) and, on his ‘À la Russe’ disc (7/17), an Islamey which is among the finest ever recorded.

One hardly needs to be told, listening to the opening of Op 29, that it was inspired by an Alpine torrent, so beautifully conjured is it by Kantorow père et fils and the Tapiola players, a passage which also immediately establishes the ideal balance between piano and orchestra – a further plus for this recording (tip of the hat to producer Jens Braun and sound engineer Martin Nagorni). ‘Prodigiously uneven’ though the Third Concerto may be (in the opinion of Alfred Cortot), this team papers over the cracks and the exuberant high spirits of the finale, as bracing as a splash of cold mountain water, are hard to resist.

Arguably the greatest of the five concertos, No 4 sets out on an uncertain journey, improvisatory, discursive, as if trying out and then discarding certain themes and ideas before pulling them all together in the second half. It begins, like the famous Organ Symphony (No 3), written a decade later, in C minor and ends in a triumphant C major. I had forgotten just how demanding is some of the piano-writing (for example, several passages of rapid sixths or thirds played simultaneously in both hands) but I have rarely heard it delivered with such commanding ease and infectious delight.

For further evidence of Kantorow’s skill, listen to the first few minutes of the Fifth Concerto and you’ll hear soufflé-light leggierissimo scale passages contrasted with fortissimo octaves of penetrating depth and weight. Yes, they are in the score but you will rarely hear them delineated as well as this. The exotic second movement, with its references to various musical genres – a Nubian love song, a gamelan, a Spanish guitar – is, again, among the best on disc and in fact my only quibble about the whole recording is the unmarked accelerando through the coda which renders the peroration inappropriately lightweight, a concern which does not disqualify it from sitting beside Hough (Hyperion, 11/01) and Darré (in all three), Cortot (in No 4) and Chamayou (in No 5 – Erato, 10/18).

Concerto for Piano and Orchestra No. 5, 'Egyptian'