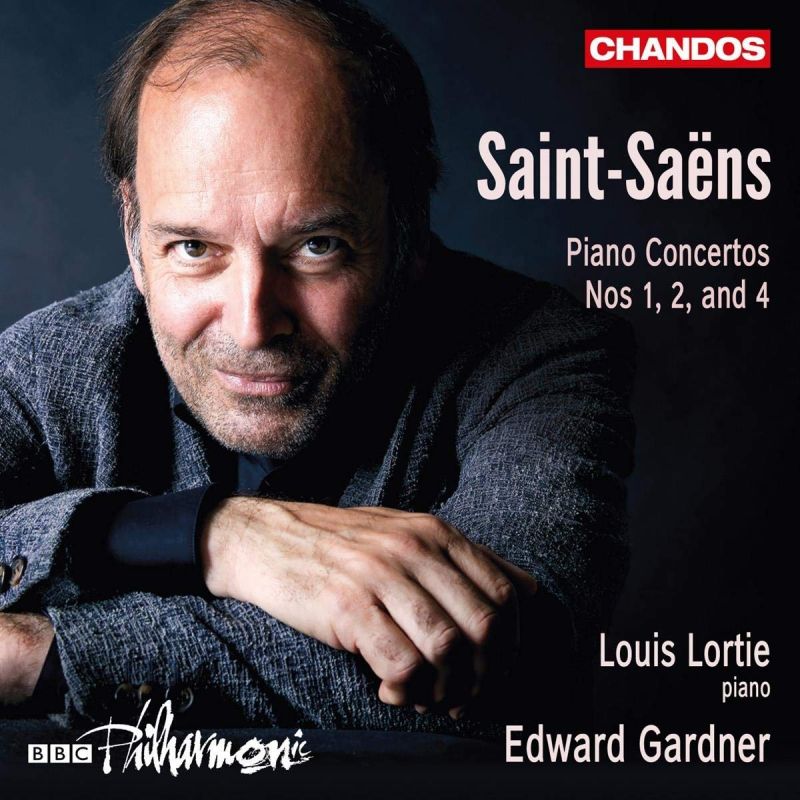 It is perhaps unfortunate that I began my listening with the second work on Louis Lortie’s disc, the G minor Concerto (No 2), which opens with a passage for solo piano. I found the tone and placement of the soloist not immediately alluring, in fact slightly disconcerting. The ears had to adjust – unusual for a Chandos concerto recording – which they soon did, with the realisation that Louis Lortie had decided throughout to dominate or at least match his conductor’s forthright accompaniment. This is not the most elegant recording of Saint-Saëns’s Second Concerto but it is bold and fiery, with the frisson of a live performance.

Small, unimportant things draw attention to themselves, like the hard mallets used by the timp player in the Scherzo. Likewise, the opening of the exuberant and underrated First Concerto. This has two horns playing mp the triplet figure that provides the first subject answered by two (chromatic) horns playing the same phrase pp and sons bouchés (ie stopped). Usually, the players achieve this echo effect sitting next to each other; Gardner (and, surprisingly, Oramo – Hyperion, 11/01) put the second pair backstage. I don’t say it is unsuccessful, just unnecessary. The performance of the concerto fizzes with testosterone (offset by an enchanting account of the reflective slow movement) and would be a highly recommendable front runner were it not for the final pages, where the orchestra obliterates the brilliant flights of the soloist. To hear what Saint-Saëns wrote (and in all the movements of all five of his concertos), turn to Jean-Marie Darré and Louis Forestier, though of course in far less opulent late-1950s mono sound.

No such niggles obtain in the Fourth Concerto, which goes splendidly throughout in all departments. In fact, the only thing missing is one ingredient common to both Darré/Forestier and Cortot/Munch (1935, surely one of the great concerto recordings), and that is charm. A final complaint: why does the conductor get bigger billing than the soloist on the Chandos CD cover? Obviously this is a collaborative venture but ultimately it is the pianist who is the star in a piano concerto recording and who should get at least equal billing.

The G minor Concerto opens Bertrand Chamayou’s disc. Good as the Lortie/Gardner account is, it simply does not compare in detail, refinement or sheer Gallic exuberance. In fact, I would go as far as placing Chamayou and Krivine at or near the top of the myriad recordings currently available. Let me count the ways. A small detail – but one which Saint-Saëns took the trouble to carefully notate – is in the opening (unbarred) piano solo. Amid the 32nd-note flurries is a series of left hand tenutos, hardly noticed by Lortie but wittily pointed by Chamayou, whose whole approach is less fussy and coloured by a deliciously lucid tone. His pianissimo-leggiero and jeu perlé playing are quite masterly, shown at his best in the Scherzo (with a more discreet and collegial timpanist) in which the second subject is far removed from Lortie’s galumphing farmer and more a light-footed dancing master. The finale zips along with exemplary clarity – listen to the precision of those trills! – and ends in spine-tingling exultation.

The Egyptian Concerto (No 5) is hardly less successful. Stephen Hough is perhaps marginally more atmospheric in the slow movement and the greater tone painter of the two, but Chamayou never loses sight of the fact that this is a virtuoso piano concerto. One can well believe that Saint-Saëns found his inspiration for the opening measures of the finale in the pounding of the paddle steamer’s wheels as it travelled up the Nile. The final octave peroration played pìu mosso makes for a thrilling conclusion.

Chamayou follows the two concertos with seven well-chosen solos, among them the Étude en forme de valse. I can safely say that this is the most scintillating account I have heard other than Alfred Cortot’s celebrated 1931 recording – it’s that good – and shows a clean pair of heels to the cautious Piers Lane on Hyperion’s set of all Saint-Saëns’s études. Indeed, Chamayou is the more alive of the two in the three other études he plays, one of which is the rarely heard Les cloches de Las Palmas (No 4 of the Six Études, Op 111). Listen at the 1'57" mark: have church bells calling the faithful to prayer ever been more uncannily imitated on the piano by any composer? Talking of whom, the Mazurka No 3 and Valse nonchalante, Op 110, included here, must have been particular favourites of his as he himself made a piano roll of the former in 1915 and a shellac recording of the latter in 1904. It is with this that Chamayou (albeit far more nonchalantly than Saint Saëns) concludes this most desirable disc.

Concerto for Piano and Orchestra No. 5, 'Egyptian'