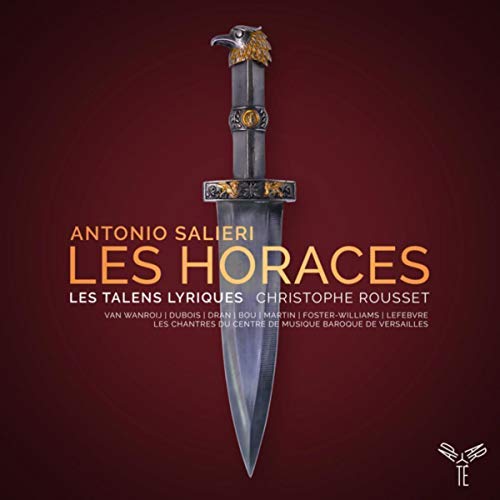 In response to the first performance of Salieri’s Les Horaces (Versailles, 1786), an eyewitness reported ‘there cannot be a more humiliating fate for a tragedy of this kind, which, instead of moving the court to tears, drew laughter’. After three public performances in Paris the work disappeared into oblivion. Nicolas-François Guillard’s libretto is modelled after Pierre Corneille’s play (1640) about the ancient Roman warrior Horatius and his brothers (their father is also called Horatius); they are appointed to settle a bitter quarrel with the neighbouring city of Alba Longa in single combat. Inconveniently, the Albans choose Curiatius (who has just married Horatius’s sister Camilla) and his brothers as their champions. In a nutshell, Horatius junior is the sole survivor and victor. In history (and Corneille) he also kills his sister Camilla as punishment for her grieving over the enemies of Rome; Guillard initially had her committing suicide but then decided merely to have her going off stage in a bad mood that might not necessarily be implacable.

This live concert recording by Les Talens Lyriques and Christophe Rousset reveals that Salieri’s experimental set-pieces show the influence of his mentor Gluck. From the first imposing bars of the Overture to the tragic denouement just under 90 minutes later, the orchestral playing abounds with incisive theatrical momentum and an affinity for gracefully shaped harmonic details. Most characters and the chorus are integrated into dramatic events that propel forwards with rapid transitions. Arias are in short supply and brief – the most notable are sung marvellously by Judith van Wanroij’s Camille. As Act 1 reaches its conclusion, superb woodwind-playing, vividly taut strings and the disciplined choir of the Centre de Musique Baroque de Versailles integrate deftly in an ensemble prematurely celebrating the apparent end of hostilities (and the union of Camille and Curiace); the ensuing ceremonial intermède for the Roman populace imploring the Deities for divine assistance is spearheaded with roaring aplomb by Andrew Foster-Williams’s High Priest.

In the first scene of Act 2, the lovely trio ‘Douce paix, transports pleins de charmes’ lurches suddenly into Horace’s valorous reaction to news that the gods have chosen him to defend Rome’s honour (the trumpet-festooned ‘Dieux, protecteurs du Tibre’), followed hot on its heels by his friend Curiace’s alarm at discovering that he must be the champion of the Albans – his conflicting emotions in ‘Victime de l’amour, victime de l’honneur’ are sung ardently by Cyrille Dubois and illuminated by plaintive woodwinds. The extraordinary succession of accompanied recitatives and duets between the star-crossed lovers (in Act 2 scene 5) alternates between passionate quarrelling and exquisite tenderness. In some respects, Salieri’s music for the second intermède seems more remote from Mozart’s Viennese comedies than the public scenes in Verdi’s Don Carlos. The frenetic series of denunciations in Act 3 is an implausible scramble from a dramatic point of view, although the interruption of the Roman celebrations by the dismayed Camille’s bitter rejection of her own gloating family (and the entire nation) has compelling emotional power.