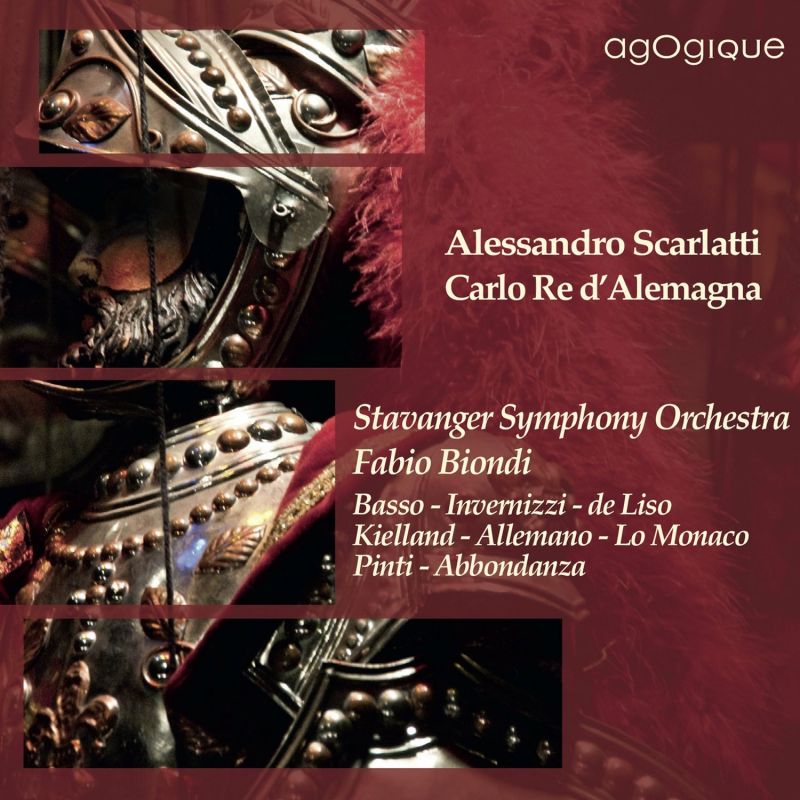 Agogique’s deficient booklet-notes lack an adequate synopsis and offer only scant information about the historical context and musical elements of Scarlatti’s Carlo re d’Alemagna. The first performance took place at the Teatro San Bartolomeo in Naples on January 26, 1716, and the original cast included Senesino (Lotario) and Durastanti (Giuditta), just a few years before both worked for Handel in London. The infant Carlo is a silent role who never sings; his succession to his late father’s throne is the dispute on which the drama turns. His much older half-brother Lotario yearns for the throne, as he makes very clear in the opening scene (the amiable aria with horns ‘Del ciel su i giri risplenda il sole’, sung eloquently by Romina Basso); he doubts the legitimacy of Carlo and attempts to discredit his widowed stepmother Giuditta – but a spanner is thrown in the machinations when it becomes clear that Adalgiso (Lotario’s son) and Gildippe (Giuditta’s daughter from a previous marriage) will not renounce their love. Lotario eventually repents his tyranny and enlightened order is restored.

Notwithstanding some mercurial quirks, Fabio Biondi ensures that the modern-instrument Stavanger Symphony Orchestra play in a competent Baroque style. Marianne Beate Kielland excels in Adalgiso’s numerous tender love arias and the lament ‘Se la bella tortorella’ (a reaction to his father’s wrath). Romina Basso’s limpid lyricism in ‘Aure voi che, susarrando’ suggests that Lotario has a sensitive side, which contrasts neatly with the bellicose response of the true villain Asprando (‘Già il mio cor di fede’, a concise trumpet aria sung brilliantly by Josè Maria Lo Monaco). Giuditta’s emotional distress in Act 2 is characterised compellingly by Roberta Invernizzi: she bids farewell to her infant son Carlo as she sends him into hiding (the anguished ‘L’innocenza in te vegg’io’), but the drama rapidly intensifies when she discovers she has sent him into a perilous trap; the animated vengeance aria ‘Miei fidi a vendetta’ breaks down into icy slower passages in which she imagines she sees the ghost of her son. Basso’s agile divisions are superb in Lotario’s furious ‘Tiranno, sì’, at which point the character seems beyond the reach of reason, but there is sublime clarity when he eventually recognises the virtue of his defiant son in ‘Riede quest’alma in calma’. Scarlatti’s lighter touch for Neapolitan comedy is also evident in scenes for the flirtatious servants Bleso and Armilla that conclude each act.