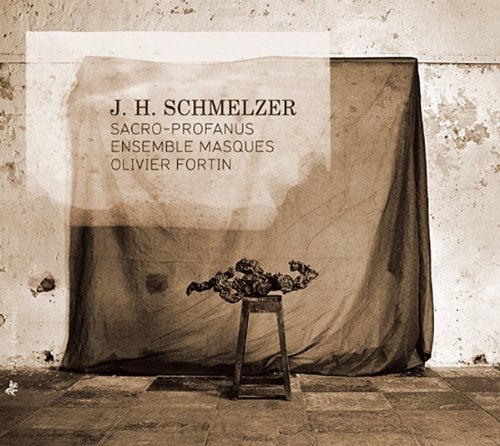 Johann Heinrich Schmelzer (c1620/23 1680) spent most of his career occupying prestigious appointments at the Viennese court of Emperor Leopold I. In his dedication to Sacro-profanus concentus musicus (1662) the composer stated that ‘this Sacred-Profane Musical Concord…may serve both the pious veneration of the saints and the honest pleasure of mankind, both to arouse piety in church and to refresh the human spirit outside it’. The book contains 13 sonatas that range in scale from two up to eight instruments; Ensembles Masques present seven sonatas in five or six parts. The ascending cadences that commence Sonata III are an example of the six-part string textures played exquisitely by fiddlers Sophie Gent and Tuomo Suni, viola players Kathleen Kajioka and Simon Heyerick, gambist Mélisande Corriveau and violone player Benoît Vanden Bemden. Their performances apply conversational sophistication to contrapuntal intricacy, nowhere more so than in the softly rapturous slow passages during Sonata IX.

Schmelzer’s diversity and imagination are revealed in a variety of other pieces such as the elegaic Lamento sopra la morte Ferdinandi III (1657; his earliest and probably most often recorded piece), the short ballet Die Fechtschule (1668; in which there is battaglia-style imitation of clashing of swords at a fencing school), an evocation of Polish bagpipes playing folk music in Polnische Sackpfeiffen (1665) and a not-so-subtle splash of humour from rumbling bassoon interruptions during a five-part sonata Al giorno delle correggie (1676) that alludes to the after-effect of eating a lot of beans. These outstanding performances are by turns beguiling and entertaining.